I never understood the magic of a Eurail pass until recently, when I used one to travel for 6 weeks over the holidays in Europe. There is something beautifully liberating about being able to hop on and off trains at will, especially trains that would otherwise be out of my budget. From mid December 2015 through January 2016, I used my Eurail pass to visit 7 countries and 13 cities across Europe. This was my route: 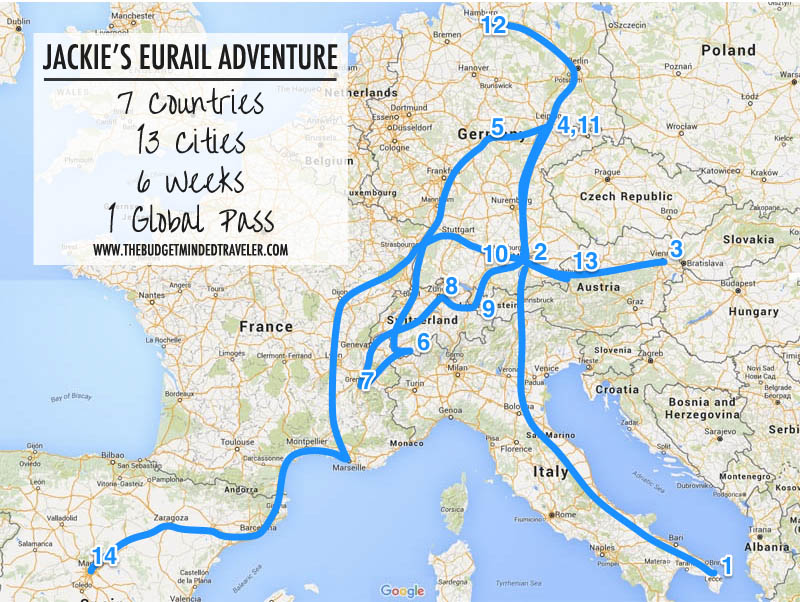 I started in Lecce, Italy where I had spent a month living with two locals and enjoying the slow, southern Italian lifestyle. From there I went to Munich where my brother joined me from the States, and we went to Vienna (Austria) then to Leipzig and Bad Langensalza (Germany), and on to Verbier (Swiss Alps), Grenoble (France), Zurich (Switzerland), Vaduz (Liechtenstein) and Munich again where my brother went home. From there I continued solo back to Leipzig, then to Hamburg (Germany), then to Salzburg (Austria), and then all the way to Madrid (Spain) which was my last stop.

Here some of my favorite moments from my train-hopping adventure: 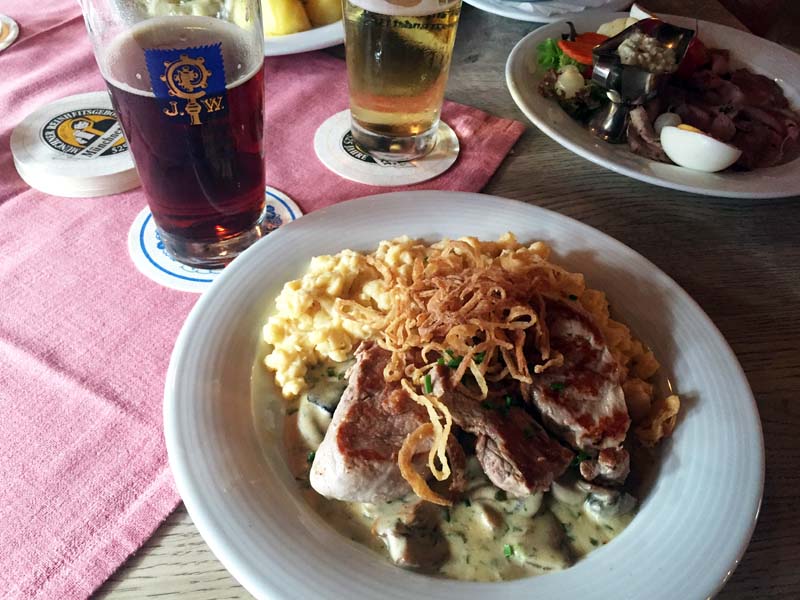 Sahne Schnitzel at Augustiner Keller in Munich. Munich is my favorite city in Germany. I’ve been there for Oktoberfest four times, and visited otherwise at least four more times. One of my favorite things about Munich is the beer hall culture (obviously). This delicious plate of food can be found at Augustiner Keller, which I highly recommend. Sahne Schnitzel (pork medallions with a mushroom cream sauce) and homemade spaetzle is one of my all-time favorite meals. When served with a Dunkel, I am in heaven. To top it off, I got to enjoy this meal with two dear friends that I met in Italy seven years ago. This was the first stop on my Eurail adventure, certainly off to a great start. 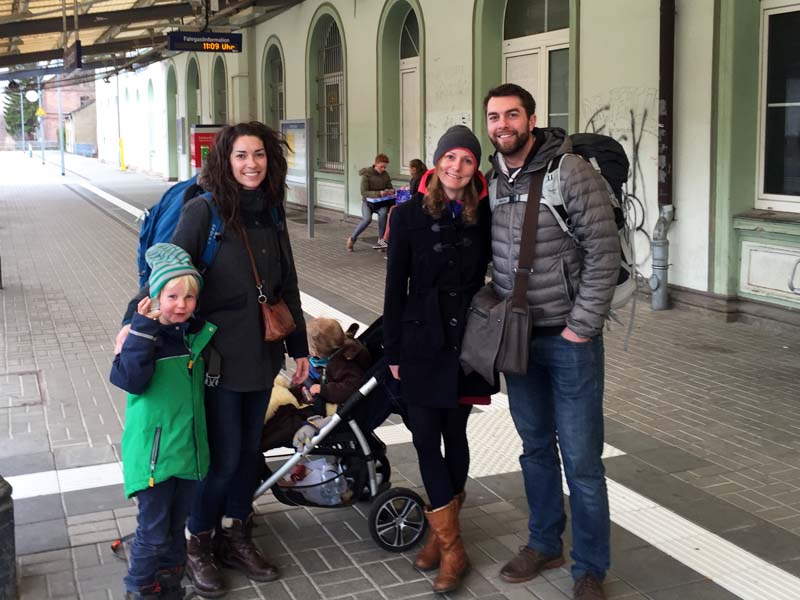 Christmas in Bad Langensalza, Germany. When I was a senior in high school, my family hosted a German foreign exchange student named Lydia (pictured above in the middle). When we met we were both 16, and now we are both 31, still in touch, still sisters. This is the second time my brother and I have spent Christmas with her at her parents’ house in Germany, although this is the first time that there were grandkids involved! It was so great to enjoy some family time in the midst of my solo journey. 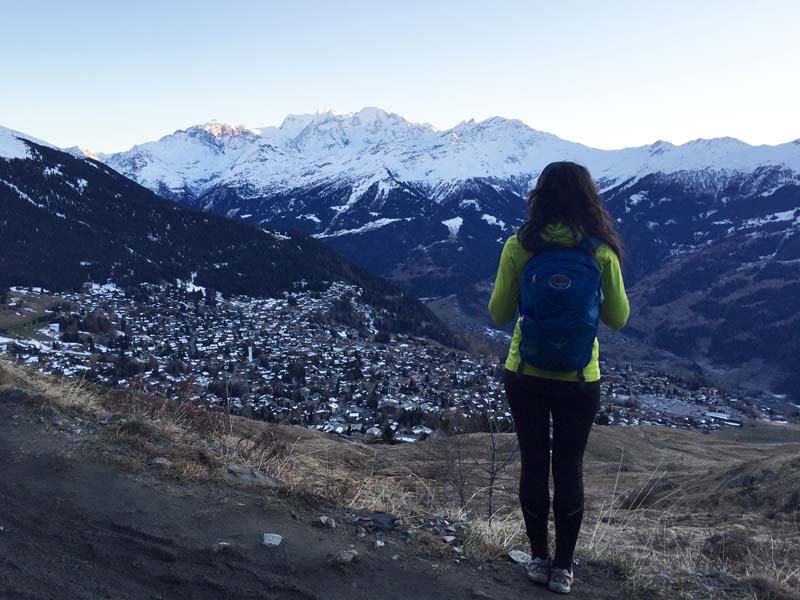 Hiking in Switzerland. We went to Verbier, Switzerland to go skiing, but to my complete and utter delight there was no snow in the village! This gave us the opportunity to go hiking where people normally go skiing on the lower mountain. Hiking is one of my absolute favorite activities and I hadn’t seen mountains since trekking in Patagonia in October. This filled my soul.

Related: 6 Tips to Travel Switzerland on a Budget

Skiing in Switzerland with hardly any snow. While it may seem like a disaster, I LOVED it. Terrible snow conditions meant lots of other things: time to enjoy the beautiful weather, taking plenty of breaks to eat and drink (picture fondue on top of the Swiss Alps), sleeping in… It was the best ski day I’ve had in years, probably because we only took about 5 runs all day 😉 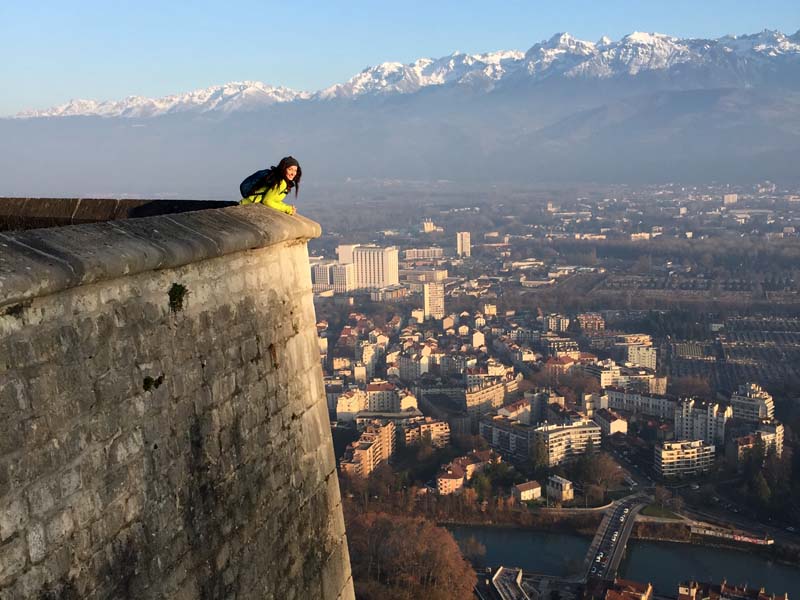 Hiking to the Bastille in Grenoble, France. After a rainy night and cloudy morning, the sun came out in this glorious valley amidst the Rhone Alps in France. We hiked above the clouds and into the sun, until all the fog burned off, leaving this incredible view below. We treated ourselves to a traditional style lunch at the top, in the fresh air, drenched in sunlight, watching the gondola go up and down from the center. It was one of those days where time passed slowly, and smiles were plenty. 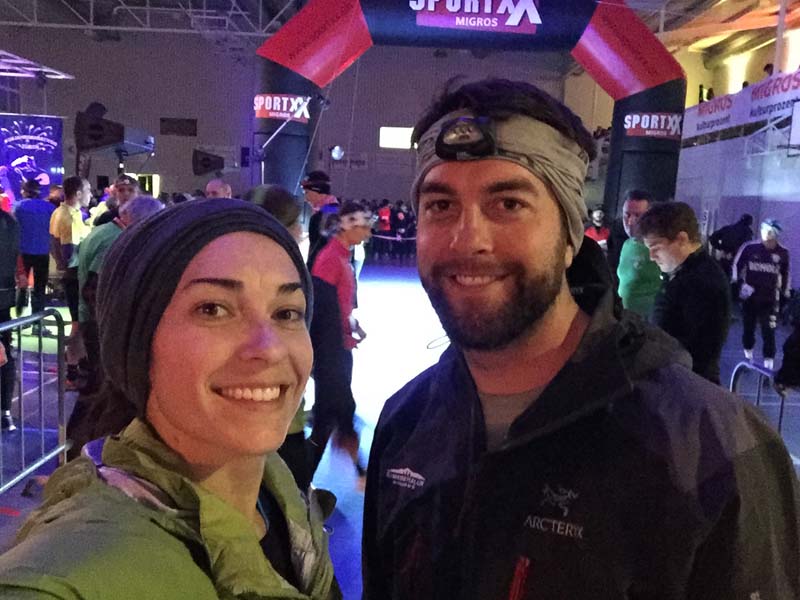 Ringing in 2016 by running a 10K at midnight. One more win for Switzerland, my brother and I actually ran a 10K in the middle of the night in Zurich to ring in the new year. Not only did we run it, I PR’d! (For those of you who don’t speak running, a PR is a personal record). I was more than ready to put 2015 behind me, and the thrill of the countdown to the race start and then running under fireworks and ringing bells in the dark for the entire race was completely unparalleled in my life experience. What a night, and what a way to kick off a New Year. 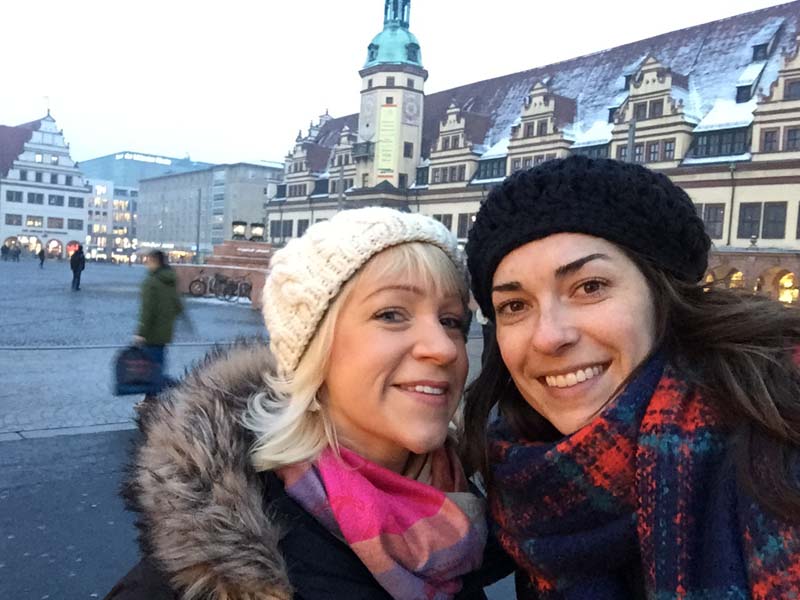 Making memories and relaxing in Leipzig. This is Steph. I met her in 2004 in an Italian class in Montana, and she’s lived in Germany for 9 years now. I interviewed her about her transition abroad on my podcast a while back, and this is the first time I’ve gotten to visit her abroad. She hosted me and made me feel SO comfortable that instead of a week, I ended up staying 10 days (also the beauty of the Eurail pass). After constantly being on the go for the better part of the last seven months, anywhere I can feel at home is a blessing. We explored so much of Leipzig and even took a day trip to Dresden, all new territory for me. “No matter where you are, it’s your friends who make your world.” 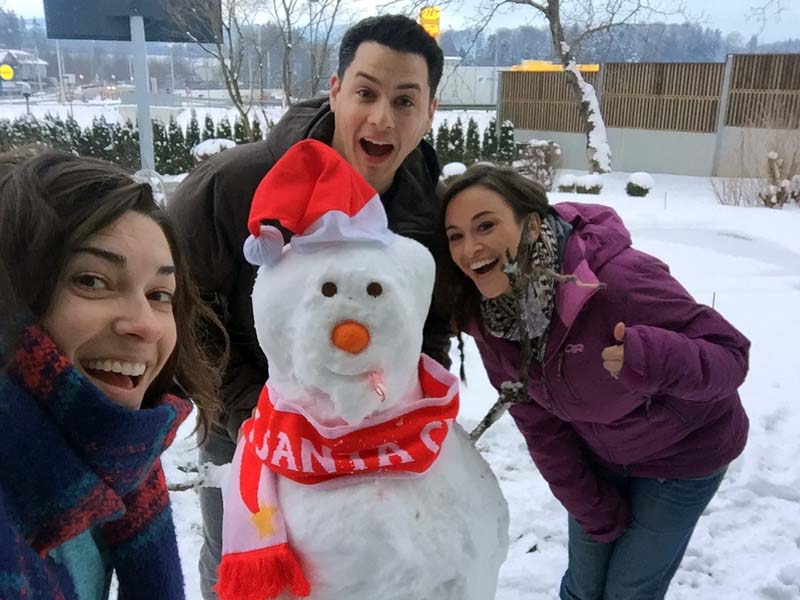 Snow day in Austria. Speaking of friends, this is Erin and Erin from Surviving Europe, I also interviewed them on my podcast about their adventure of selling everything and moving to Austria (just outside of Salzburg). Since I knew I’d be galavanting across Europe, we decided to meet in person and I went and stayed with them for an AMAZING four days. It snowed, so we had a snow day. We baked bread, made hot chocolate with marshmallows, built a snowman, watched a marathon of Game of Thrones (YES), and also talked a lot of business (which is fun for some people). Salzburg was certainly not on the way to Madrid from Hamburg, but I am SO glad I decided to go out of my way to make this connection happen. #worthit 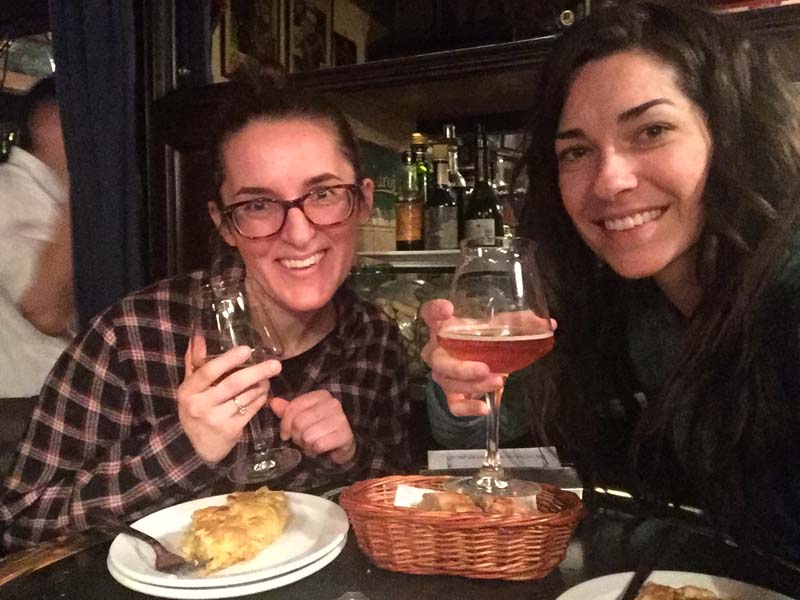 Sunshine and tapas in Madrid. I found a great deal on a flight to Argentina from Madrid, so that made it my last stop on my Europe tour. I had never been before and only gave myself 48 hours, but I loved it immediately and am already excited to go back to explore more. What I didn’t expect was what happened in this photo. This is Kelley, a long-time BMT reader who is now teaching English in Madrid. She saw that I was in Madrid and reached out to me on social media, so we met for tapas and beer. It was SO fun to get to meet her, I’m convinced I need to start doing BMT meetups. This was a great send-off from quite an adventurous three months in Europe.

In the end, I took 33 trains and 6 buses and made countless memories, and I’m thankful to have had this opportunity to explore corners of Europe that I hadn’t seen before. For now, on to South America… and country #50!

Thanks to Eurail for providing my global pass. All opinions are my own.