According to some estimates, an astonishing 1 in 4 Americans claim to have some kind of fear of flying. I am definitely one to admit my aviophobia, which comes as a surprise to many. Because I am a frequent flyer, how could I possibly be afraid of flying? Or perhaps my fear isn’t very strong because I go through with it so often, right? Wrong. I have a white-knuckle, gripping fear of being in a chair 30,000 feet up in the sky, and personally I can’t understand why others don’t. You who don’t have the slightest fear of flying, maybe YOU are the crazy ones.

This morning the news reported that a flight attendant was critically injured after hitting the ceiling so hard that a panel actually cracked. A baby was thrown from its parents’ arms but “landed safely” two rows away. TWO ROWS AWAY. This was a result of some severe turbulence the plane experienced on a flight from Denver to Billings, Montana. Billings, Montana! That one hits close to home, and news like this always deepens my fear of flying.

How to “Overcome” the Fear of Flying 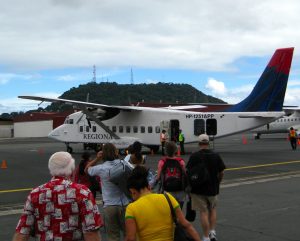 So what can we possibly do to curb our debilitating fear of flying? There are many opinions and helpful suggestions out there, but you’ve got to figure out what actually works (or helps the most) for you. When it comes down to it, I don’t think there is anything that could rid me of my fear of flying, which ultimately comes from my gut-wrenching fear of heights. For me, it’s not so much the fear of flying or even being trapped, but a fear of falling, helpless and hopeless out of the sky should something catastrophic happen. There are a few things that I have found to help me “stay calm” while strapped into a chair in a small space 30,000 feet above solid ground (or ocean to make matters worse). I hope at least one of the following tips can help you attempt to stay calm as well:

What Works for You?

When 1 in 4 Americans admit to having some sort of fear of flying, we know two things are true: 1) that this affects a LOT of people, and 2) that the fear is going to vary from person to person. I have determined that mine is more a fear of falling from upwards of 30,000 feet in the sky, but I know others suffer more from the claustrophobic element of being trapped in the cabin of a plane, or otherwise. What is your fear of flying about? How do you combat it and do you have any tips to share that could help the rest of us?