Nearly every airline has some sort of airline miles program. I say join them all. They are free, they take only a couple minutes to join, and it can’t possibly hurt you to be capable of collecting miles on every flight you take. You never know when some miles are going to add up to be enough to put towards a flight. I definitely have my preferences when it comes to frequent flyer miles programs, as you can probably tell from the photo. I got my MileagePlus Premier Silver welcome package in the mail this week as a result of all the traveling I’ve already done this year! Benefits, benefits, benefits! But how do you figure out which program is the best? 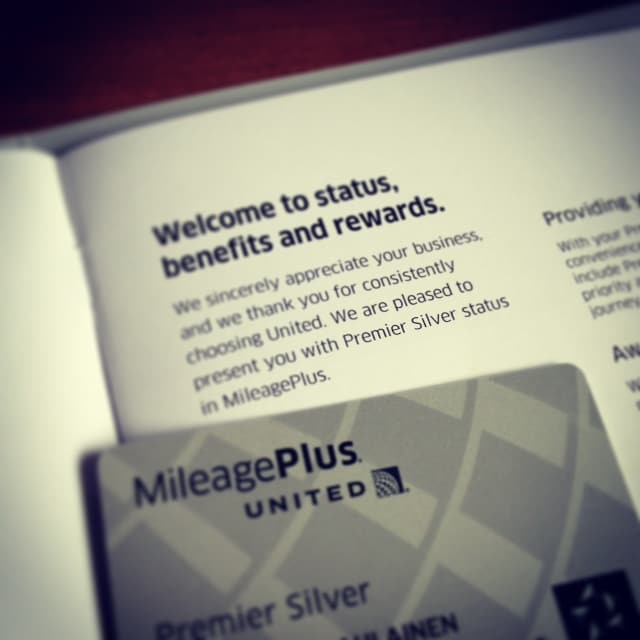 Which Frequent Flyer Miles Program is the Best?

There are many factors to consider in this very broad question, and the answer is going to be different for everyone:

Why I Prefer United MileagePlus

I have never known another rewards program to be so… well, rewarding. There are many reasons why I am partial to United:

Isn’t it nice to be rewarded? Because of my experiences and success through the MileagePlus, I shop for United flights or Star Alliance flights whenever possible. It’s simple really: in my experience, United has rewarded me the most, so why wouldn’t I want to continue this relationship that I have with them? I’m sure there are plenty of success stories through other airlines, but my point is that while I have been (and still am) a member of many other airline miles programs, United is simply my favorite.

When I started joining airline miles programs in 2004, I didn’t fly any specific airlines, I just let my miles accrue to see where (literally) they would take me. It does take a lot longer to earn enough miles for a flight when you do it this way; however, if you don’t have a preference yet it is a good place to start. A couple years ago I was able to use the American Airlines AAdvantage miles I had accrued for a flight to Peru, and I was very happy about this since it would have been a rather expensive ticket. I also was able to fly first class on the way back (yes, really) for the same amount of miles as it would have cost me to fly economy because they were having a deal. What a wonderful day of travel that was. The only downside was that we had to travel out of state to an airport that was serviced by American Airlines. As a member of One World, a program similar to but not as big as Star Alliance, American Airlines would be my second favorite except for that rather unfortunate fact that they don’t service my home airport, and they have lost my luggage several times.

Which Airline Miles Program Should I Avoid?

In my opinion, Delta has the worst mileage program in terms of rewards. I have recently been researching a flight across country, one-way. This flight would cost me 12,500 miles on United, and 40,000 miles on Delta. No joke. I’m not saying Delta is a bad airline, in fact they have great service, (that’s not what this post is about). I’m just saying I avoid flying Delta when I have the option because the rewards are seemingly hopeless. Yes, I would spend a little more on a flight where I could fly United or Star Alliance rather than purchase a cheaper flight on Delta. To me, it’s worth earning the miles, because I am literally that much closer to a reward flight. I can get much more out of my United MileagePlus account, or even my American Airlines account than I ever could with Delta.

What About Earning Miles Through a Major Credit Card?

If you spend a lot of money and want to earn extra miles, go ahead, sign up for a mileage credit card and start earning miles that way, too. Just be aware that most of these cards will charge you an annual fee of about $95 per year, perhaps after the first year. Some of the signing bonuses are really tempting (bonus miles, buddy passes, free checked bag, etc.), but look at the big picture and make sure it’ll be worth it in the long run if you do decide to go this route. Personally, I don’t do this and here’s why: I have done extensive research about which credit card gets me the best rewards, and I have settled on cash back as my favorite type of reward. In my experience, I earn cash back quickly and it benefits me more than earning miles. In addition, when you take into account that most of the mileage credit cards charge an annual fee, it makes it extra worth it just to stick with the cash back. Besides, if you really do travel enough, your program should give you some of these benefits for free like United is doing for me! I would love to hear your thoughts about this subject, both mileage programs and mileage-earning credit cards alike.

**Update (11/24/13) We bit the bullet and decided to test out our first airline credit card, that being the Chase Mileage Plus Explorer card through United. We earned 50,000 bonus points in the first three months, and now my husband has about 80,000 miles in his account. That is counting the miles from our recent trip to Europe, which we also earned extra mileage on for being Premium Silver members. I have around 40,000 miles in my account simply from frequent travel. Why we decided to go for it: It takes about 60,000 miles for a free flight across the world on United. This means that right now both of us are eligible, he just has to transfer some miles to me and we could go. We can also use it abroad without paying foreign transaction fees which is usually 3% of every purchase. To me, these are both worth the annual fee. I also have heard a rumor that if you are in good standing as a credit card customer and you give the customer service number a call when your fee is due, you can politely ask them to waive it. Hey, there’s no harm in asking. Do you have any experience with miles credit cards?