Public transportation in Macedonia, Albania, and Greece is a bit underdeveloped when trying to get to and from certain corners of the countries in decent amounts of time. This post’s purpose is specifically to help those on the internet tying to figure out how to get from Ohrid, Macedonia to Meteora and/or Delphi, Greece.

We researched several blogs and websites before making our trek, and ours was yet a new route, but I think it was also the best one.

Keep in mind we had 3 people for this trek, which made taxis cheaper, but if you have at least 3 people this is definitely the way to go.

Getting from Lake Ohrid, Macedonia to Greece

Lake Ohrid to Meteora via Kozani

We did this in October (off-season) so perhaps there were less buses than normal, but the first bus from Ohrid to Bitola didn’t leave until 10:30 in the morning. We thought this was a problem because we would need as much time as possible to figure out transfers. We had no idea how far we would be able to get, but we knew the bus at this time would at least make us miss the bus from Florina to Thessaloniki. To avoid this we found a taxi at 9:30am (you could go earlier but don’t go later). It wasn’t a “real” taxi, but a real taxista set us up with him and we went through Bitola all the way to the Greek border for 33 euros. The bus to Bitola would be $10 per person, so to get all the way to the border saved us a transfer and it’s about the same cost as bus and taxi.

Walk across the border to Greece. What most blogs and websites won’t tell you is that this is no man’s land. There is a functioning WC on the Macedonian side, bring your own toilet paper, it’s one of the nastier squatty potties I’ve experienced.

Once in Greece, there is nothing. If you are lucky enough to see a taxi, grab it. They go by the meter so there is no haggling. We walked to a small store and the man there called a taxi for us. It ends up being around 25 euro to Florina. If you have euros that’s best. They do not accept Macedonian denars, nor do they acknowledge Macedonia as its own country. If you need to go to an ATM, just say “bank” or “automat” and then “bus.” Warning: Greek taxi drivers think they are Formula 1 drivers, hold on tight.

The bus station is not so much a station as a storefront where the bus parks.

Get a ticket for Kozani (8.80 euros each). You should have time to grab lunch before the bus leaves.

Once at Kozani, get a ticket for Grevena (5.50 euros each), again you should have about an hour to spare and there is free Wi-Fi at the bus station.

You will arrive to Grevena around 6pm, but there are no buses to Kalambaka until 10am the next day. Corner a taxi driver by himself (don’t find a group of taxis, they are harder to bargain with), and try to get the price down to 65 euros (or better) to Kalambaka. Starting price is 80 euros, most are hard pressed to go under 70. Commence Formula 1, round 2.

After about an hour you will be in Kalambaka (Meteora). Use Booking.com to find somewhere to stay and enjoy the monasteries! 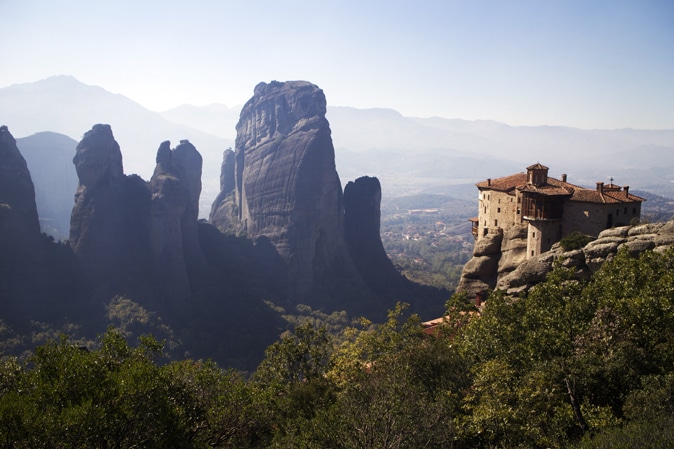