Looking back at my 9-month trip around the world, I can honestly say that besides Italy (obviously), Kosovo cuisine was my favorite. What! Where even IS Kosovo? What is Kosovo like? Who talks about Kosovo?
Kosovo has only been an independent country for eight years, and apparently it’s still very much a hidden gem. It is nestled between Serbia, Montenegro, Albania, and Macedonia, in a place called “The Balkans.” No, not the Baltics, that’s way up north. We’re talking about Southeastern Europe, the area directly north of Greece, west of Turkey and the Black Sea.

Why Kosovo Cuisine is the Best

Because of its geographical location, this entire region has seen a plethora of cultural influences over the years. The area that is present-day Kosovo used to be part of the Ottoman Empire, Italian-occupied Albania, Nazi Germany, Serbia, Montenegro, Yugoslavia, and Albania. One of the greatest results of this turbulent path is an incredible marriage of western and eastern cuisine.
To me, it’s like the best parts of Turkish cuisine combined with a western influence. That makes it not too entirely foreign that my stomach can’t handle it, but instead, just enough unique flavor to start a party with my taste buds.
Related: Tips for Traveling in the Balkans
I’m convinced that a lot of the food we eat in the US is so processed that it has lost flavor (not to mention nutrition), or perhaps it’s just fake food to begin with (don’t get me started). In other countries, I find that because they don’t focus on mass importing and exporting foods, they use locally sourced, non-processed ingredients, which results in rich flavors in even the most basic of foods.
Less is more. Any 3-ingredient pizza in Italy will be 100 times more delicious than a 12-topping pizza in the United States. Who needs all that extra crap anyway?
I found that the cuisine in the Balkans follows this same sort of idea. Kosovo does it especially well. Here are some of my favorite foods I experienced in Kosovo:

This is a story in itself. Flija may be the most complex simple dish I have ever seen. It takes about five hours to make one, and I don’t mean you can leave it to bake, we’re talking five hours of constant work and attention. It is made by pouring alternating layers of thin batter (in triangle patterns) and cream into a circular pan, and baking each layer one at a time with a special lid that is either electric or covered in hot coals. Simple and delicious. 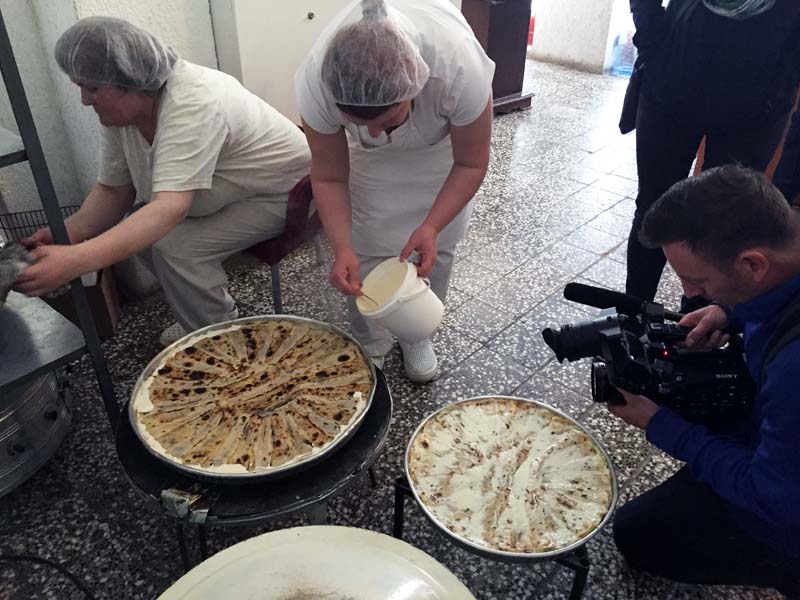 I am almost drooling just thinking about all the flavorful meats to choose from. You can order a board of different cuts of grilled meat, which comes with bread that you can stuff them in (similar to čevapi). There are dips, lettuces, tomato salsas, and other things to add if you want. Again, so simple, so delicious.
Related: 4 Reasons to Visit Sarajevo Right Now 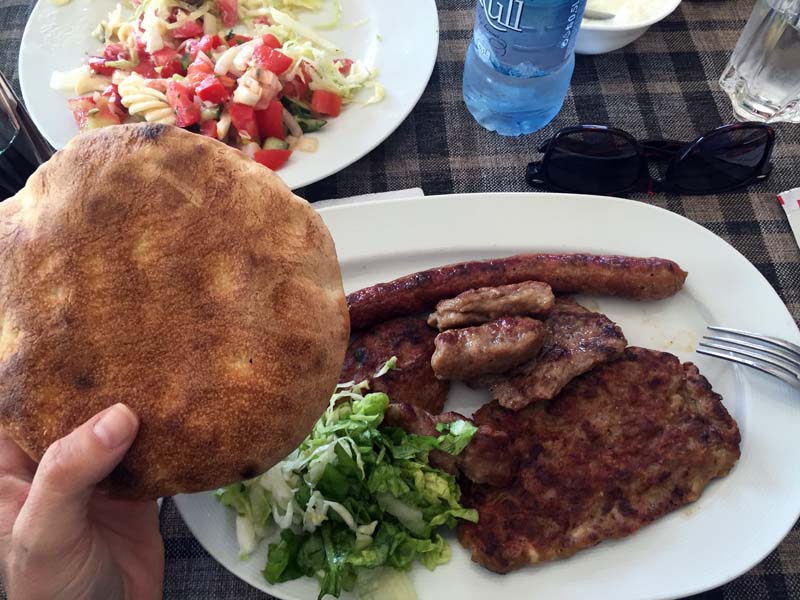 Okay, I NEVER order whole fish because I get to impatient with picking out the bones, and if I’m being honest, I just don’t love seeing a face still attached to my food. That being said, I wanted to order this traditional trout in Kosovo because it is a staple dish.
It was easily the best trout I’ve ever had. Cooked to perfection with just the right seasonings. Take me back. 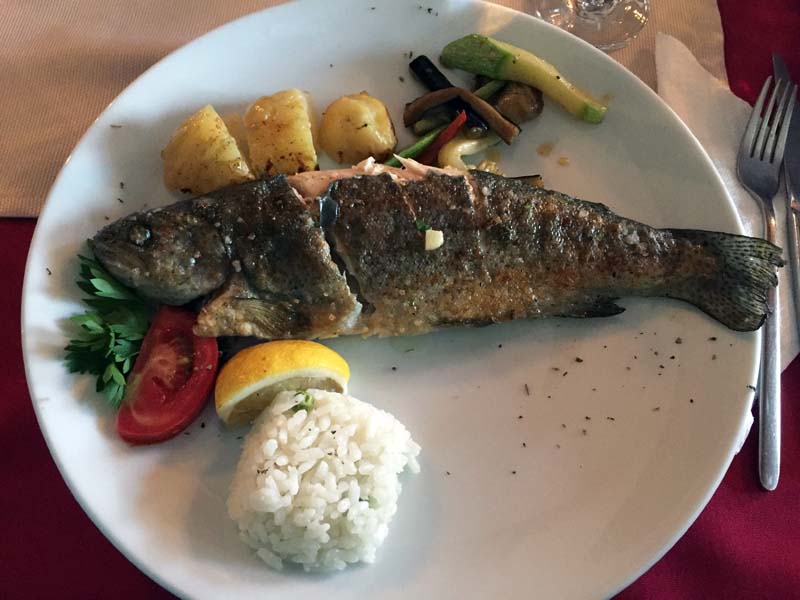 This was one of the best parts of meals in Kosovo. Along with the flija and other stuffed and baked breads that they do so well, Kosovars are the masters of dips. Spicy dips, yogurt dips, tomato dips, pepper dips, cheese dips, all the dips! My favorite was a hot pepper cheese dip, oh to be able to recreate that, guess I will just have to go back. 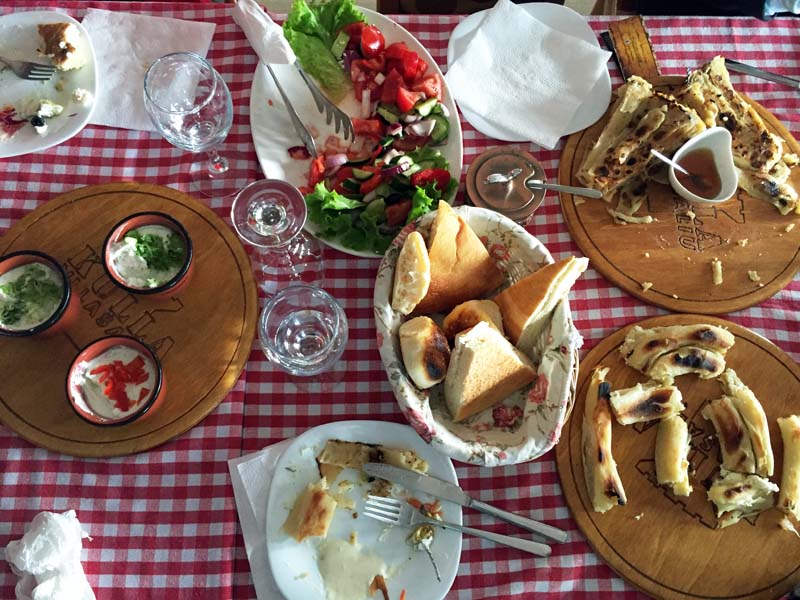 Move aside, Italy, you have competition when it comes to espresso. I can’t even believe I’m saying that, but it’s true, and Kosovo is it. They take their espresso culture seriously, it is a craft, and they are good at it. They also like to sprinkle chocolate on top of their cappuccinos. Sign me up. 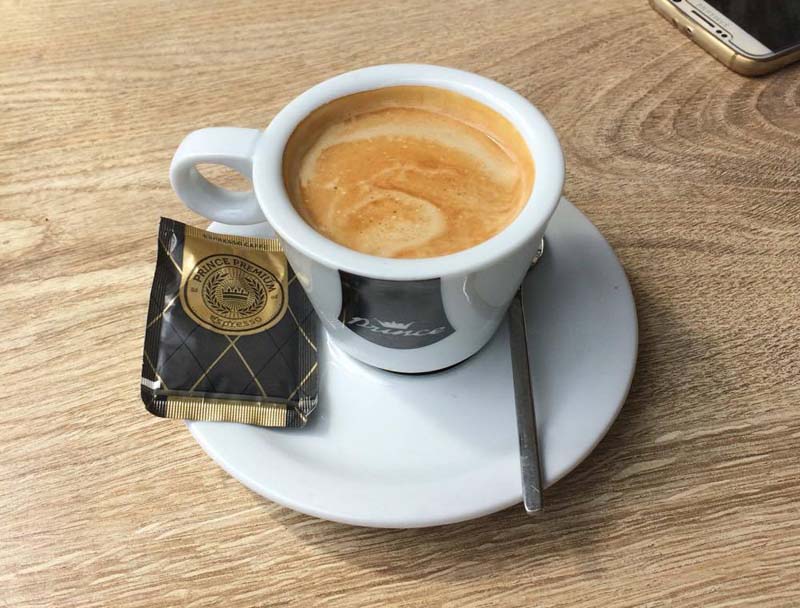 Okay, Rakia itself is not my favorite drink. It’s the homemade liquor that every country in the Balkans makes differently. However, out of all the Balkan countries where I’ve had the pleasure of tasting rakia, Kosovo’s was by far the best. My favorite was a Walnut Rakia that I tried in the town of Peja. Who would have thought?
It’s a little early to talk about Kosovo as a contender in the craft beer scene, but they do happen to have one microbrewery in the capital city of Prishtina that makes a few styles, including a delicious Porter. Judging by the rest of the cuisine in Kosovo, it’s probably only a matter of time before they have an award-winning brewery as well.
I look forward to my next visit to the Balkans for many reasons, but I really can’t wait to eat the food again. I’ll leave you now with one piece of advice. Next time you’re casually passing through Kosovo, EAT AS MUCH AS YOU CAN.