One of the long-time items on my Bucket List was to stay in a Bed & Breakfast on the coast of Maine and eat lobster. I’m here to proudly CHECK that off and tell you about my Maine road trip, passing along some of the advice that was given to me, and rounding up the places I stayed and things I did along the way (and… ahem, the beer I drank).
First, I have to recommend that you visit Maine in the fall, around the middle of October when the leaves are changing. This is the first time I’ve experienced a New England fall, and there is simply nothing like it in the world.

Route: Ogunquit (including Kennebunkport, York) > Portland > Freeport > Camden > Bar Harbor (Acadia National Park)
Time: Two weeks
Mode of Transportation: My grandma’s van! I did not camp because I did not have gear, but if you can camp, that is absolutely the way to go (because $$$).
Goals: Eat lobster every day, drink lots of local craft brews, and see lots of fall colors (all of which I accomplished)
Note: Maine is not cheap if you want to eat lobster every day and not camp. Prices seemed to be peak while I was there because of tourists and colors, but apparently it’s still considered off-season by many hotels. Somehow, it was still expensive. This is why I road trip and camp a lot in the U.S., because it’s hard to travel cheaply here. Accommodations in this country are grossly overpriced, but, that’s a subject for another day.
Related: Motion Sickness Tips for Travelers 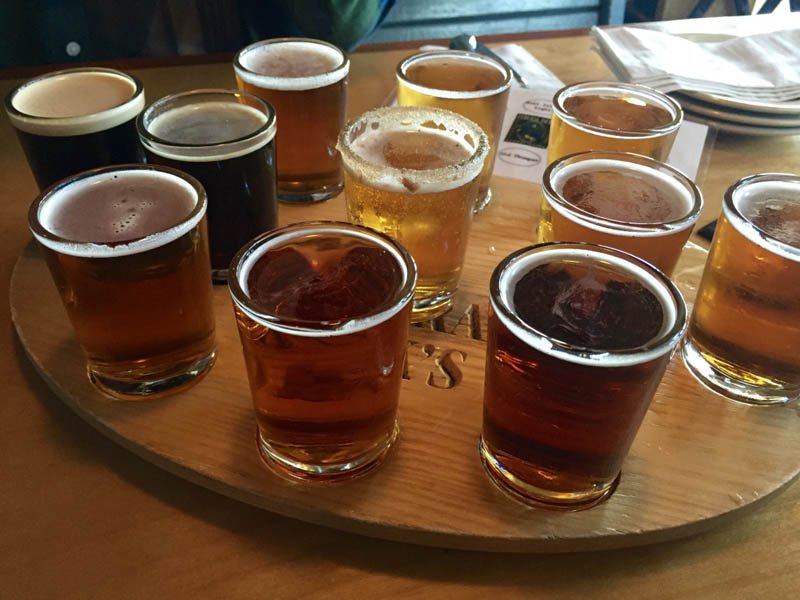 Things to Do in Ogunquit, Maine

I stayed for a week in Ogunquit with family in Perkin’s Cove, which is a must-visit, even if you don’t stay there. It is a tiny little peninsula packed with shops, restaurants, lobster roll shacks, and a marina. We stayed in a vacation rental right on the tip of the peninsula.

Things to Do in Portland, Maine

I stayed for two nights at an Airbnb near downtown Portland. An Uber into town was only about 5 bucks, and even though I had a car, I paid for the Uber because I knew I would be sampling a lot of beer! (Drive smartly, people)
Click here to save $55 on your first Airbnb stay.

Driving Up the Coast of Maine

TONS of outlet stores, and here you will find the famous L.L. Bean campus (it’s intimidating). Also not to miss is Maine Beer Co., one of the best breweries in Maine – IPA fans, try “Lunch,” and if you’re incredibly lucky, try “Dinner” (rated 100 on Beer Advocate). Follow them on Twitter or Instagram to find out when it will be released next.

Camden is an adorable, cramped and crowded little town, but worth a stop. I stayed at Towne Motel, ate at Peter Ott’s on the Water (small and overpriced lobster roll), ate at Camden House of Pizza (best budget option around and provided leftovers for my drive the next day), and went for a beautiful run all the way out the peninsula to Rockport and back.
Just north of Camden is Camden Hills State Park, where you can drive up Mt. Battie and have a view overlooking Penobscot Bay and much of the Maine coast on a clear day.

Things to Do in Bar Harbor, Maine and Acadia National Park

Bar Harbor and Mt. Desert (pronounced like “don’t desert me”) was the last stop on my trip up the coast of Maine. I stayed at the Edenbrook Motel, which is only a mile outside of Bar Harbor, close to one of the entrances to Acadia, and a great value compared to other options in this area ($65/night).

1. Lobster is my new favorite food.
2. Maine craft beer blew my expectations out of the water, and I have high respect for the efforts going on in the beer scene there. And there are so many more I haven’t even tried! Have to save some for next time, I guess.
3. The fall colors in Maine are not as vibrant as they are in New Hampshire or Vermont, but the contrast with the ocean makes leaf peeping there completely worthwhile.
4. It is a perfect road trip destination because the distances between the towns are short, and the drive is beautiful all the way.
5. I will definitely be back, perhaps for longer next time…
What did I miss? Tell me in the comments so I can go back and do it next time!