My first sunset over the Saguenay River on the 48th parallel was enough to make me feel both welcomed and already at home in Quebec. I don’t know what I was expecting to experience, but the lush, green mountains and picturesque waterways I’d seen in my first few hours of exploring the province completely blew me away.
And I hadn’t even done anything yet.
I’ve traveled across the world to experience some of the very same things I did in Quebec, right in our own backyard. And the BEAUTY! Pinch me.
I’ve now been there twice in the last year alone, adding more and more to my notes about this beautiful region that I have fallen in love with.
In this post, I’ll share some travel tips for Quebec (Quebec City and north), including where to stay, what to do, and what’s absolutely not to miss. If you have ideas to add, please put them in the comments!
This post contains affiliate links.


Fun facts: In Algonquin, “Quebec” means “where the river narrows,” referring to the great St. Lawrence River. It has a unique history and is the only province in Canada with French as its sole official language.

How to Get to Quebec

Driving Over the Border into Canada

Drive! Yes, you can drive from the US right to Quebec City and beyond. This beautiful province is just over the border from Vermont, Maine, New Hampshire, and New York. It takes about 4 hours to drive to Quebec City from Burlington, Vermont. Last time I went I actually flew from Denver into Quebec City, rented a car, drove to Vermont to visit my grandma, and drove back to spend some time in Quebec. Except for a mildly confused US Border agent, I had no problems taking the rental car over the border at all.
I had done my homework ahead of time. I specifically rented from Hertz, because when calling ahead, they promised me I could freely drive their cars over the border without problems, as long as I had my rental paperwork. Truth. My rental car for 4 days only cost me $108 total, no hidden fees, no problems at the border.
Hertz Tip: If you use the United MileagePlus Explorer Visa, you can get a good discount on Hertz rentals.

Quebec City – You can fly straight to Quebec City (YQB). It’s a small, easily-navigable airport with several rental car vendors right there at the terminal. It has a decent amount of flights each week connecting it with other Canadian and US cities. I rented my car straight from the Hertz car rental at the Quebec City airport. I’ve actually done this twice and had seamless experiences both times.
Montreal – This is the only time I will mention Montreal in this article since I’m not focusing on this city, but it does have a very well connected airport (YUL) and is only a couple hours drive away from Quebec City. Just don’t stop at only seeing Montreal! The rest of Quebec is… well, keep reading…
Related: 3 Reasons to Visit Canada in 2017

Things to Do in Quebec

Attracting more than 1 million festival-goers each year, the Festival d’été de Québec is THE place to be for some of the biggest headliners in music. It celebrated its 50th year in 2017, and I got to attend for 3 nights. I saw the Gorillaz, Metallica, and Muse, but it’s not just one main stage. There are at least 10 stages and hundreds of performances throughout the festival. The best part is that you can buy one entry bracelet that gets you into any show, it is transferrable, and it’s less than $100 CAD. It happens every July!

Quebec is a front-runner in the via ferrata scene in North America. I’ve personally done two different via ferratas in Quebec, but there are thirteen routes to choose from! (And counting). I highly recommend Palissades de Charlevoix via ferrata, which includes a suspension bridge and rappel that will certainly get your blood pumping. Listen to my podcast about it!
If you can’t make it to Charlevoix, try one of the routes at Montmorency Falls, which is just outside of Quebec City.

Rent a car and drive north from Quebec City into Charlevoix, and go explore. I climbed L’Acropole des Draveurs in the Regional Park of Hautes-Gorges of the Malbaie River, not necessarily an easy climb with 3,000 ft of elevation gain, but entirely worth it.
There is hiking, camping, fishing, canoeing, cruising, kayaking, and more available at this park and in the park next door Parc National des Grands Jardins.
Related: Guide to Banff Lake Louise, Canada

4. Kayaking in the Saguenay Fjord 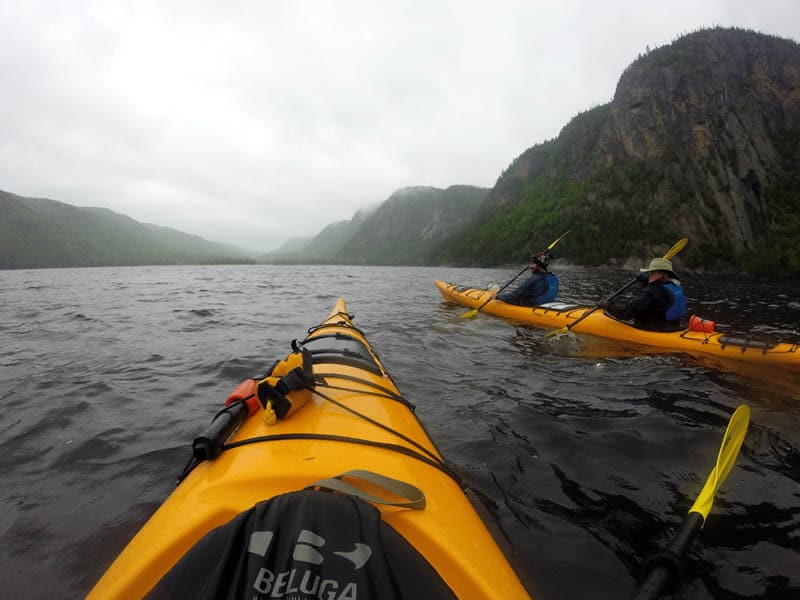 You can kayak, hike, or try a thrilling via ferrata in the Parc National du Fjord-du-Saguenay. If you’re in the area, this is not to be missed. The water here is black, something that only happens when fresh meets brackish. If you’re lucky, you may even see some marine life! We saw one curious sea lion on our excursion.

Grab the ferry from Baie-Sainte-Catherine towards Tadoussac, which is a free ferry and runs all year long. Once you’re there, go to the Marine Mammal Interpretation Centre and take a wander through, be sure to check out the narwhal tusk! Then get on a zodiac whale watching tour Croisières AML.

If you’re in the Chicoutimi area and like zoos, the Zoo de Falardeau is not to be missed! From grizzlies to ostriches to tigers and everything in between, even rescued raccoons, there are plenty of animals to see. If you’re lucky, you may even get to cuddle with baby animals recently born in captivity. This zoo rescues animals from all over the world, go and learn about what they do and support their efforts. Great fun for the family.

Quebec has hundreds of kilometers of beautifully maintained bike trails. I can recommend two specific places for you to explore. The Blueberry Trail in Saguenay-Lac-Saint-Jean winds through miles and miles of countryside, with possibilities to stop at local cheese shops and breweries. Microbrasserie du Lac Saint-Jean is a great place to stop for lunch and try some local brews.
If you’re in Quebec City, try the trail leading from Quebec City to Montmorency Falls (11k). It’s an easy, picturesque ride that the whole family can do. Rent bikes with Cyclo Services, near the water in downtown Quebec City. Bonus fact: this office is right across the street from a great farmers market!

Quebec is known for its terroir. Nearly everywhere you look, you’ll find local shops with some sort of locally-harvested consumable, whether it be wine, beer, cheese, honey, or otherwise. This is why renting a car is the best way to go, because you can pull over and stop for fresh cheese curds whenever you see them!
In Charlevoix, try the Laiterie Charlevoix where you can stop for cheese and ice cream tastings and the Miellerie du Cratere de Charlevoix for honey tastings. And… I have to say it, EAT ALL THE POUTINE.
Poutine is essentially a pile of french fries and cheese curds slathered in gravy. Many chefs take this a few steps further, adding their own ingredients, which basically means you could eat a different style of poutine every day with no need to feel guilty! 😉
While delicious poutine abounds in Quebec, my personal favorite came from a place called Le Chic Shack (like Shake Shack, only Quebecois). It is right in the main square of Quebec City, next to Le Chateau Frontenac.

Quebec is quite progressive in its craft beer scene. You may have heard of Unibroue, a famous brewery with beers such as La Fin du Monde, Blanche de Chambly, and others, but these barely scratch the surface of delicious beers found in Quebec. Anywhere you see “Microbrasserie,” be sure to stop for a beer! The hostel in La Malbaie (see below) is a great place to taste test some carefully selected local beers while listening to music, open mic night, or whatever they have going on at the hostel that day.
By local recommendation, I bought a bottle of La Vache Folle ESB and hiked it up to the summit of L’Acropole des Draveurs where I enjoyed it with my lunch, overlooking what could’ve been the fjords of Norway. Quebec amazes me.

Parlez vous francais? Neither do I, yet. But you can learn French here in Quebec! Right in our own backyard, you can immerse yourself in this beautiful language, taking classes online or with private teachers or even in public settings. Do a quick Google search for the plethora of options.
Related: How and Why You Should Learn a Foreign Language 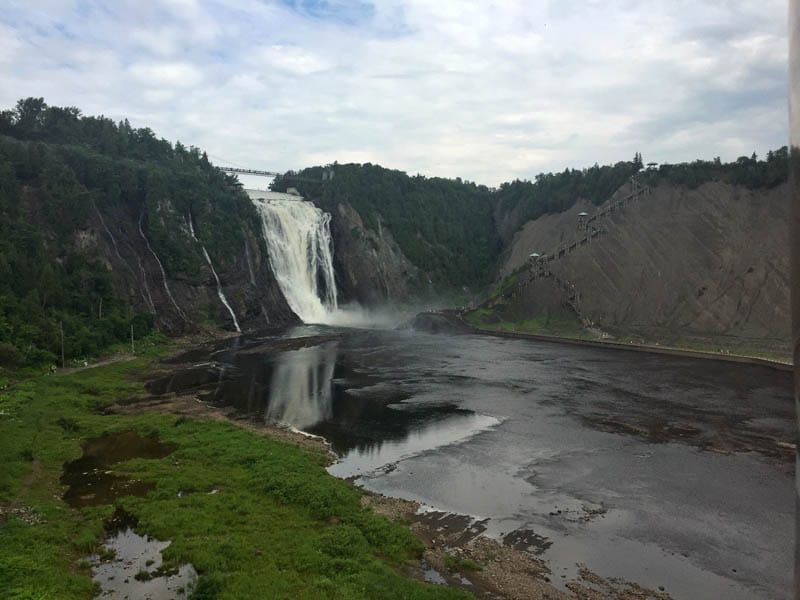 Just outside of Quebec City is Montmorency Falls, which you can rent a bike and cycle to, drive, or take a bus there to spend a few hours. There is a zip-line spanning the width of the falls, which I have done and it’s SUPER thrilling. If that’s not your cup of tea, you can watch the zip-liners from the pedestrian bridge, which crosses directly over the top of the falls. For the more adventurous, hop on one of the three via ferrata routes on the far side of the falls.
When you’re done exploring, hit up the beautiful restaurant overlooking the falls for a delicious déjeuner. 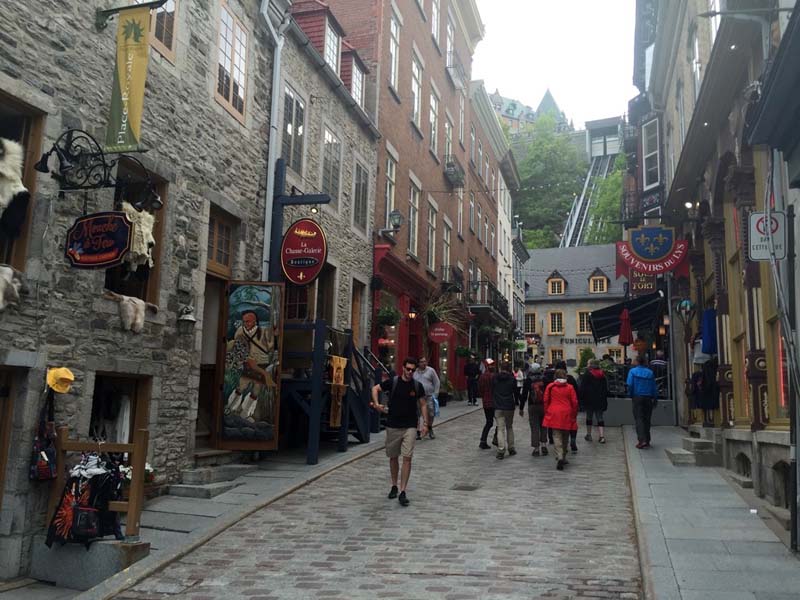 Quebec City is the only walled city in North America and it carries an old-world European vibe. Let me put it into perspective for you: on July 1, 2017, Canada celebrated its 150th birthday. Meanwhile, back in 2008, Quebec City celebrated its 400th. Yeah. Walking through its streets, eating its food, and speaking its language, you would think you were in Europe, but that is the beauty of Quebec!

Attention astronomy nerds! Did you know that Charlevoix actually exists in a massive crater? In La Malbaie, there is a museum there where you can go and learn about the crater, as well as other craters that are like it around the world. If you manage to go on a clear night, you can take advantage of their telescope out back to explore the night sky. I recommend this as a surprisingly fun stop if you happen to be staying in La Malbaie.

If I haven’t emphasized it enough yet, hear this: Quebec is a fabulous road trip destination. The roads are well maintained, and you can be north of Quebec City and into the beautiful countryside within hours of leaving the US. Just brush up on your French, because you won’t find English speakers in most of your stops outside the city! Remember, if you choose to fly into Quebec, rent a car at the airport and start your journey from there.
Related: Best Road Trip Apps for Your Next Adventure

Resource: View other hostels and alternative lodging options in Charlevoix region.
This post is part of a collaboration with Tourisme Charlevoix, Tourisme Saguenay Lac-Saint-Jean, Quebec City Tourism. As always, all opinions are my own.