Sailing up the coast of Croatia has been on my bucket list for years. I wasn’t even sure it was something I could ever afford, but in my head, I had firmly decided that’s how I wanted to see Croatia. Then, in the summer of 2015, I learned about a tour company that actually offers tours that travelers like me can afford. Yes, budget-minded travelers, who travel independently, who prioritize saving money, can actually afford to pay someone else to plan a trip. In my opinion, this is unprecedented. Never have I considered tour prices to be truly budget friendly, until now. As you might guess, the trip I chose was the Croatia Island Hopper sail, and that company I discovered is Busabout.

The Croatia Island Hopper sail starts and ends in Split, but Busabout has two other itinerary choices as well: a one-way sail from Split to Dubrovnik, and a one-way sail from Dubrovnik to Split. They are all 8-day trips, and they hit almost all the same islands and sights. In the end, choosing one over the other may just be a matter of convenience for where you want to start and end up. This post recaps our route on the Island Hopper from Split to Dubrovnik. Click through for a look at the second half of the Island Hopper on the way from Dubrovnik to Split.

On a Friday afternoon in August, I flew into Split, a town that completely surprised me. I expected a big, busy port town, but instead I found a gorgeous harbor lined with restaurants, shops, palace walls and an old town that rivals the best of Italy. 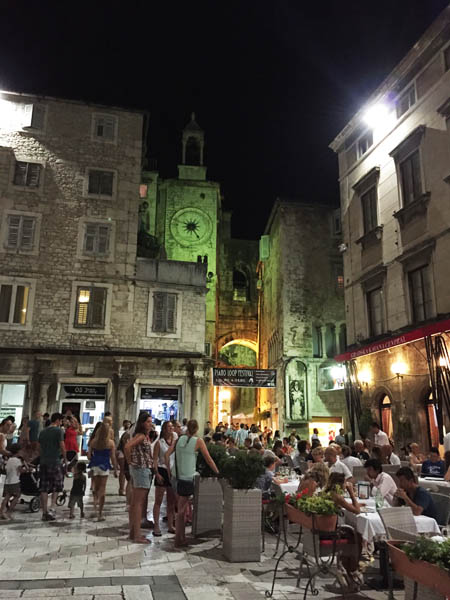 My first night there was hot and beautiful, meandering through the narrow cobblestone alleys, speaking Italian with another traveler, having Croatian beer on the street, people watching… I was deep in my element and loving every second. 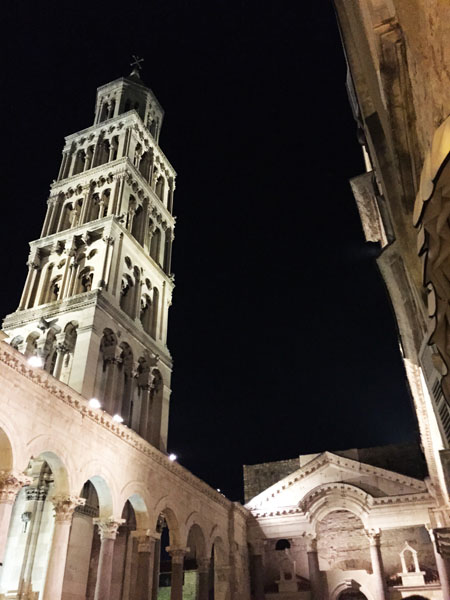 After one night in Split, I boarded my Busabout sailboat (Viktorija) for the next seven days. Busabout actually has several boats, so we got to see them in different places all throughout the week. I had never spent so much time on a boat, so I wondered if I even possessed the so-called “sea legs” that everyone talks about (I would soon find out). It turns out I was the only American in a group of 18 Aussies and 2 Kiwis, and it took zero minutes for all of us to become friends. Our guide Kelle was a 24-year old Australian angel. She deserves a trophy for her hard work and constant smile, putting up with the likes of us for a week (week after week after week through the summer), all the while insisting that the only thing she cared about was that we all had the best week ever. Amazing. 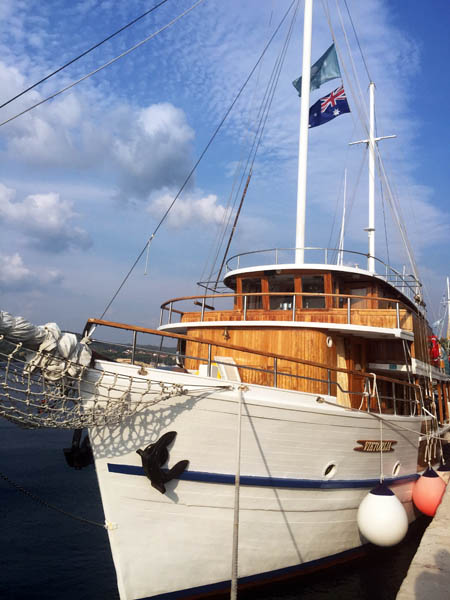 I was shown to my room on the top deck that included a bunk bed and an ensuite bathroom. The shower was an extension of the sink faucet (brilliant). The space was tiny, but it was just big enough to sleep, and that’s all we really needed. The view from my room on the top deck was always, always beautiful. Also, side note for those of you who will do this in the future: I purchased a Croatian SIM card for my iPhone before I got on the boat so I’d have internet all week (WiFi on the boat is spotty).

Our first destination was a swim stop just off the island of Hvar, to test the waters of the Adriatic, which became a daily event. Apparently not all Busabout boats do this, so another shout out to Kelle for making sure it happened every single day. Swim stops are the BEST; the essence of the trip. We spent that first night on Hvar, famous for its quaint old town. We wandered up to the fortress for a stunning view over the harbor, had a seafood dinner, and stayed up way too late drinking wine by the water.

I remember waking up to the soft beats of Croatian music the next morning, and we had already set off for the next island (that was the norm every day – the crew would be up and we would be off by daybreak). Breakfast was at 8:00am each morning, for anyone who wanted to participate (many opted to sleep through it).

This was the day that we would test our sea legs. The seas were high due to a storm, and this was the only time I cared that my room was a tiny box. By the time we arrived to Mjlet, I think we were all ready to feel solid ground, and what a beautiful place to do it. Some of the group opted to go into the national park on Mjlet, which was like a little fairy tale land. The crystal clear water of the lagoons and the surrounding forest paths and trees was exactly the escape and dose of fresh air that we needed. It would have been a beautiful place to go for a trail run if I had been prepared. That night we slept in the adorable Mjlet harbor, under a crazy lightning and thunder storm.

The bad weather endured until the next afternoon, right about the second we walked into old town Dubrovnik…

Our day under the sun in Dubrovnik turned out to be my favorite day, and it’s not because of one thing, but because of everything Dubrovnik was. It was the sun coming out for us after it had rained the whole way there, and the incredible views in every direction from atop the city walls that we walked (post coming soon), and the people watching in the square, and because it was King’s Landing (#nerdalert), and the gelato, and the narrow streets, and the beer I had that afternoon by myself as I pondered life and love… We went to dinner and out for drinks that night to a club in a castle, because that’s what you do in King’s Landing. A brilliant day. I have love for Dubrovnik.

As I mentioned previously, our Croatia Island Hopper sail started and ended in Split, so Dubrovnik marked the middle of our tour. Click through to see the recap of the second half, which I think was even more beautiful than the first half: Dubrovnik to Split.

Related: Driving Through the Balkans with Busabout: The Ottoman Trek

You know what the best part of this trip is? You can do the exact same thing. This is Busabout’s Island Hopper Croatia Sail trip, and you can book it on their website! It doesn’t have to be a once in a lifetime trip either, in fact, it runs week after week every single summer. I might just bring my friends and do it all over again next year…

*This post is part of a collaboration, but as always, all opinions are my own.