Have you ever been planning a trip and found yourself frustrated at the seemingly outrageous prices of flights? As a budget-minded traveler, it happens to me all the time.

This spring I needed to find flights from Bozeman, Montana to Europe (specifically Spain) and back, and I was hoping to pay less than $1,000 for them. Unfortunately, flights from Bozeman to Barcelona cost upwards of $1,300 alone, not counting getting to explore Portugal like we wanted to or getting to another conference we had coming up in Las Vegas.

Now we had a choice: we could surrender to high prices, or we could get creative.

In the end, we got from Bozeman to the conference in Las Vegas to see friends in San Francisco to Stockholm, Sweden, to Portugal, to Spain, and all the way back to Bozeman for around $1,100. How did we do this? By putting our efforts (a lot of effort) into researching and taking advantage of budget airlines, both in the US and in Europe.

1. If you can be flexible, look at your calendar and take advantage of where you might be (or where you could potentially go) that could help your flight situation.

I decided to take advantage of the fact that I needed to be in Vegas anyway by combining the two trips. I used discount airline Allegiant Air to get to Vegas from Bozeman for just $75. A flight from Vegas to San Francisco was $39 on Southwest Airlines. San Francisco = international hub = brilliant. Maybe you don’t already have something on the calendar, but perhaps you have friends in a city that is better connected than where you live. You could create a win-win situation by visiting them and flying out of their airport.

2. When flying to Europe, check all major cities if you are flexible.

Use Google Flights for this type of research, knowing that you can connect to your final destination via Ryanair, easyjet, a number of other budget airlines, train, or even renting a car. On this recent trip, we actually opted to rent a car to see all of Portugal and were pleasantly surprised that it only cost $134 for the entire week. Renting a car in Europe is not expensive, and if you return it to the same city, it can also save you hundreds of dollars that would be spent on public transportation.

Related: Renting a Car in Europe: 3 Things You Need to Know

Get to know Google Flights. It’s a powerful flight search engine with a beautiful map tool that shows various prices across multiple destinations (i.e. different cities in Europe) from a single destination (i.e. San Francisco). We determined that the cheapest round-trip flight to Europe was San Francisco to Stockholm for $725* (nearly half the price of Bozeman to Barcelona), so we booked it.

*There was a cheaper flight on Norwegian Air to Oslo, but it didn’t include meals, seat assignments, or miles, all of which we decided were important to us on an international flight.

3. Determine whether the cheapest price is worth the sacrifices it may demand.

In our situation, flying Norwegian Air meant no earned miles, no in-flight food, no assigned seats, and no checked bags, as opposed to flying to Sweden with my first choice airline: United, where we would get all those things. The miles alone are worth it. Another thing to think about is timing, even though the ticket may be cheap, make sure the itinerary times are appropriate without ridiculously long layovers, etc. Similarly, using budget airlines may mean flying to small, out-of-the-way airports that will cost you extra to get to and from, they may also charge for food, bags, and everything else you can imagine. They aren’t always the best way to go.

We found and booked $110 one-way flights on Alaska Air from SFO back to Bozeman after the trip. At this point we were at $949 to get from Bozeman to a conference in Vegas, to see friends in San Francisco, and of course to get to Europe and back. The last piece of the puzzle was figuring out how to get from Stockholm to where we wanted to go in Portugal, and ultimately to another conference in Spain, and then back to Stockholm.

Insert Ryanair. Ryanair is one of Europe’s leading budget airlines, “operating more than 1,600 daily flights from 72 bases, connecting 189 destinations in 30 countries.” Now that they have eased up on their baggage restrictions, they somewhat resemble a normal airline (okay, that’s still a stretch, but it’s a much better experience now). 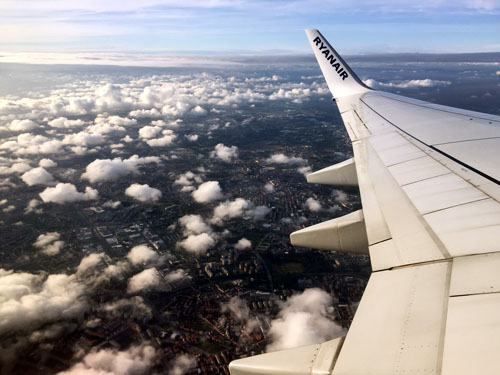 4. If Ryanair doesn’t fly direct to where you want to go on the dates you want, create a layover for yourself in a place that does provide the flights you need.

Ryanair did not have flights from Stockholm to Portugal, which is where we wanted to go. It was time to get creative. It turned out we could get from Stockholm to Barcelona and leave a couple hours later for Portugal from the same airport, returning a week later. Brilliant.

On the way back to Stockholm from Spain, the convenient and adventurous layover turned out to be Malta. Hey, why not? The direct flight from Barcelona to Stockholm would have been $250, while flying through Malta was around $70 for both flights.

5. Take plenty of time to research flights on budget airlines.

Yes, it took nearly half a day to work out all these flights, but we saved hundreds of dollars and got to see more places as a result. These flights, from Stockholm to Barcelona to Portugal and back to Barcelona and eventually Stockholm (five one-way flights) cost less than $200. Tricky, but very inexpensive and perfectly fitting to our itinerary.

Related: 8 Secrets to Finding the Best Deals on Flights

This one can’t go without saying in this process. It is tedious work and takes time and even days to research flights, connections, dates, and possibilities, but it can be extremely worth it. Rather than going straight from Bozeman to Barcelona for $1,300+, we went to several other destinations in between, managing to save about $200 each overall.