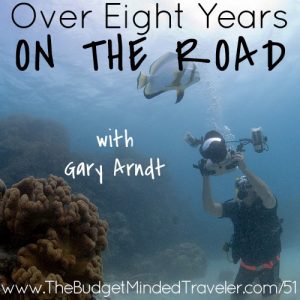 In this second of four episodes about long-term travel, Gary Arndt joins us to chat about what his life has been like for the past eight years that he has been on the road. This perpetual traveling has led him to opportunity, fame and renown, not to mention to 7 continents and almost every country in the world, but at the same time it has taken its toll, as being on the road consistently can be draining. He is “slowing down,” but wait until you hear the list of places he has yet to go this year…

In March 2007 I sold my house and have been traveling, blogging and taking photos around the world ever since. So far I have visited all 7 continents, over 170 countries and territories around the world.

I wasn’t always a world traveler. Other than occasional summer vacations, my family didn’t travel very much. I grew up in Wisconsin and never saw salt water until I was 21 years old. In 1998 I sold my business to a multinational corporation and they sent me on a whirlwind 3 week tour of their offices in January 1999. I visited Japan, Taiwan, Singapore, France, Germany, Belgium and the UK.

That trip stuck with me for years. I made a few other international trips after that to the Bahamas, Iceland and Argentina, but never really made a commitment to travel.

In 2004 I decided to go back to school and study geology. After seeing the hell that PhD students were going through, the idea of going to graduate school became very unappealing.

I decided to travel around the world.

It took about 2 years for me to tie up all the loose ends I had and sell my house. Finally, on March 13, 2007 I turned over the keys to my home.

I thought I’d be traveling for a year or maybe two. So far it has been over 8 years with no end in sight!

Gary’s website – Everything Everywhere
Gary’s newest podcast – The Global Travel Conspiracy
Gary’s travel photography course will be launching sometime later this year, stay tuned!
Packing advice: “Put stuff in a bag and go.” (I LOVE this)
Long-term travel advice: “Every single person… can spend at least three months of their lives on a single trip… actually traveling. Everyone should be able to do that… three months is a good goal.”

Give the show some LOVE (please!)

If you love the show and want to see it succeed, please leave a review in iTunes – click here to leave a review (or to read the awesome review from the farmer) and thanks so much in advance!