I have finally been to the end of the world! For 15 years I have traveled along pieces of the Pan-American highway, in Central America, South America, and of course in North America. In some places, there is only one Pan-American highway, and in others, there are several routes to get north and south.
The road officially goes from Prudhoe Bay, Alaska, all the way down to the last drive-able bit of it in Tierra del Fuego National Park, Ushuaia, Argentina, commonly known as “Fin del Mundo” or “The End of the World.”
Fun Fact: The name “Tierra del Fuego” means “Land of Fire.” It is an ironic contrast to the cold weather and snow that abounds here but named so because of all the fires dotting the coastline, burned by the natives and seen by the first European explorers who sailed through the area. 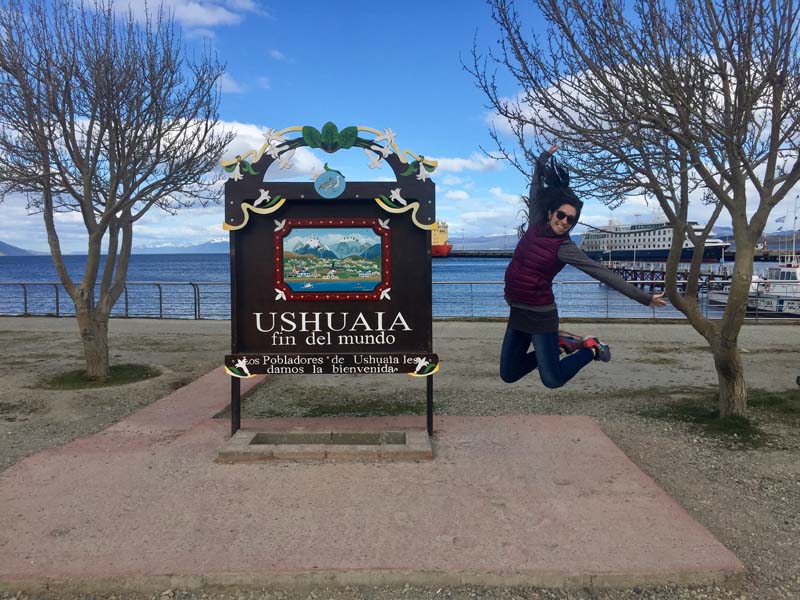 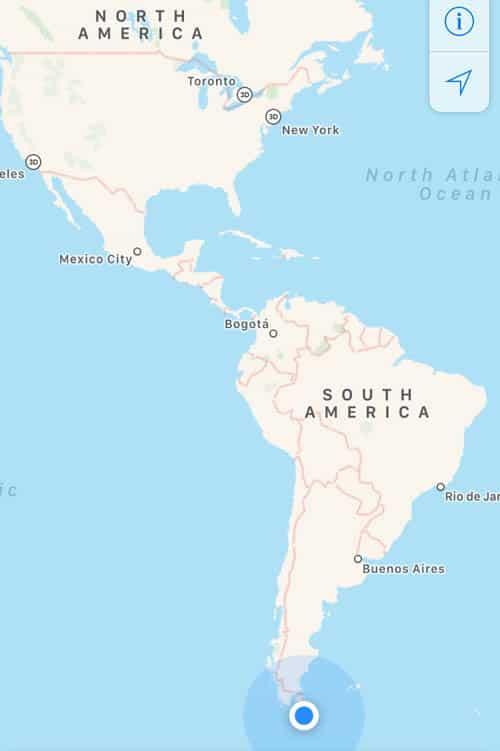 Here at The Budget-Minded Traveler, we’ve spoken with people who have traveled this road by motorcycle, by car, and by truck camper. It is a quest of many to reach the end of the world, and it was on my bucket list too, even though I didn’t journey all the way across the Pan-American highway to get there. I flew there in about 24 hours from Colorado.
Ushuaia and Tierra del Fuego have long been on my list, you guys know my love for Patagonia, so this was a special trip for me. Somehow, even after all the stories and photos, I still didn’t know what to expect, and that is the best part. Before I even start on what I did, let’s look at what I SAW from the plane:


Luckily I found out after I landed that because of the strong winds in Ushuaia, landings can be “tricky.” This is why all the locals clap after every successful landing. The woman next to me certainly seemed enthusiastic. (Insert terrified emoji here).
Because I arrived the night before the rest of my group, I felt like I had Ushuaia all to myself. I was back in the land of “vos” (I lived in Argentina last year) and I was loving it. A local named Rodrigo picked me up from the airport and greeted me with kisses (because that’s how Argentinians roll), driving a 4×4 Toyota that looked like it was ready for mud. I checked in at Las Hayas hotel and opened the curtain:
Then I couldn’t help but go to the hotel bar to enjoy my first (of many) Argentinian Malbec, because #Argentina. Exhausted from two days of travel, I fell asleep that night to rounds of thunderous applause and yelling through the walls as Messi scored a hat trick to take Argentina to the World Cup. 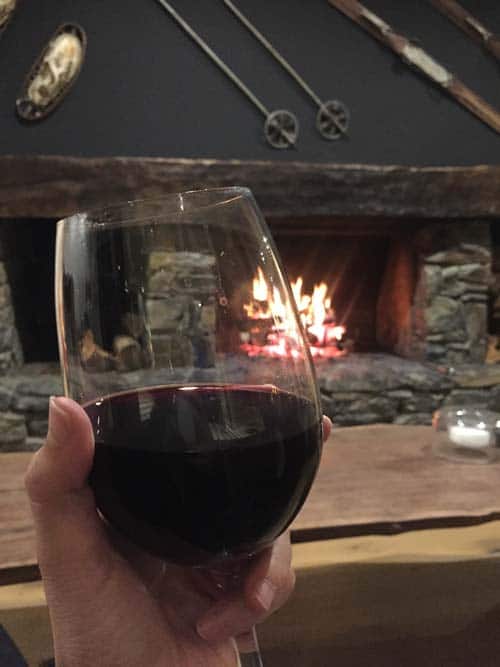 In the morning, a beautiful group of travelers who would soon be my close friends showed up at the hotel, and we took off on our first day of adventure in Tierra del Fuego.

Tierra del Fuego National Park is an absolute must for anyone traveling to Ushuaia because it is here that you’ll find the end of the road. The entrance to the park is just outside of the town of Ushuaia, there are buses that go regularly if you don’t have a car (but I recommend renting a car in Ushuaia), and the entrance fee is AR $140 (Argentinian Pesos).
There are several easy hikes you can do once you are inside. We hiked an easy trail to Lapataia Bay, which is where the road ends. While we were standing at the turn-around, two bikers arrived, having traveled all the way from Alaska. I could feel their sense of accomplishment, they couldn’t peel the smiles off their faces if they tried. What a journey.
There is a sign there where you can pose for the obligatory photo, and then there is only a footpath, leading the rest of the way to the water of Lapataia Bay. Beyond that, the Beagle Channel, Isla Navarino (Chile), and the gateway to Antarctica.


While you’re in the park, grab some empanadas and vino at the Alakush Visitor’s Center. Sit by the window, watch the birds, the water, and the brilliant Condor Mountain just across the way.
Then continue down that road to Lago Acigami. Standing on the shore, you are in Argentina, but everything you see across the lake is Chile. The border of Chile and Argentina runs straight down the middle of the island of Tierra del Fuego.

One of the largest lakes in Argentina is on Tierra del Fuego. It shares land between Chile and Argentina, and it is called Lago Fagnano. Go there. It is magical but hard to believe that a lake as beautiful as Fagnano, with completely clear water, surrounded by mountains and rocky shores, is so untouched.
When you go there, you will see no other humans, no buildings. You will hear no sounds except for the lapping of the waves and whistling of the Patagonian wind. It is quiet, serene, and beautiful.
The wind will hug you to your core. Embrace it back. You are at the end of the world.


How did we get there? Remember Rodrigo and that 4×4 Toyota that looked ready for mud? Yeah, we went off-roading! Our guides were very good drivers, so if you want an extra thrill, sign up for the 4×4 drive through the forest to Lago Fagnano. It is safe, and you won’t regret it.


Noche de Pioneros: ATVs and Dinner in a Cabin

Back before technology, and before travel to Ushuaia was easy, Argentina used to have messengers to carry news back and forth to the mainland by foot. In the case of Tierra del Fuego, a man named Ernesto Krund was the first messenger, and he built a small cabin in a valley north of Ushuaia. While the original cabin is no longer in use, a replica has been built, and it is open to the public.
If you want a unique Tierra del Fuego experience, do the “Noche de Pioneros” or “Pioneers’ Night” adventure to this cabin. You’ll learn about Ernesto Krund, who passed away in 1960, and you’ll most likely get to share some homemade stew, mulled wine, and coffee “carretero” or “street coffee,” just wait until you see how they make it.
To get there, you’ll drive ATVs under the stars, as this is a night-time tour. If it’s clear enough, be sure to find the Southern Cross over the horizon. You can sign up for Noche de Pioneros online, and don’t worry, they speak English!
A trip to this historical, cozy cabin with wood-burning stove, homemade cooking, and story time (not to mention the ATVs!) are not to be missed. It’s an easy addition to any day trip. 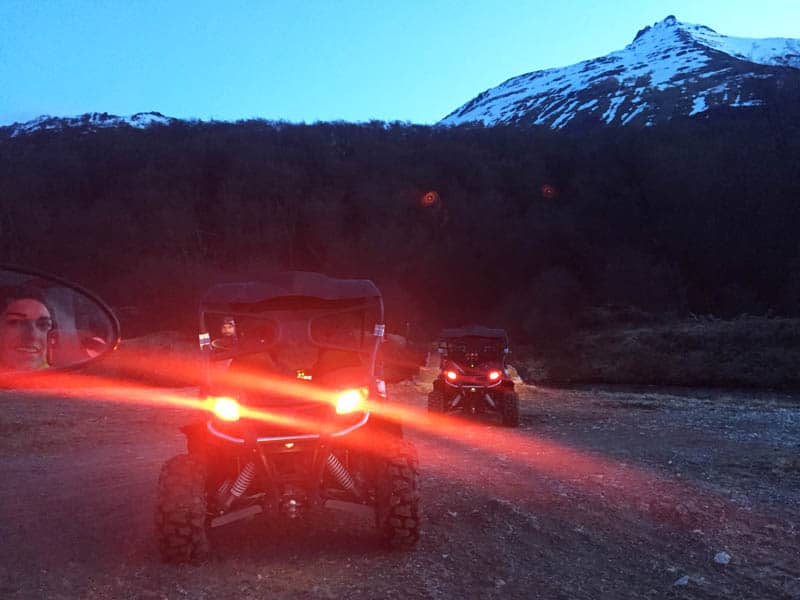 In a very remote area on the Argentinian side of Tierra del Fuego, facing the Beagle Channel and the gateway to Antarctica, there is a massive piece of land called Harberton Farm. While once upon a time it kept sheep and processed wool, the sheep are long gone and one of its specialties today is marine animal research.
If you venture to this farm, you’ll find the original farm buildings: shearing shed, living quarters, tool shed, food storage, etc., and then you’ll also see a museum, and this little unassuming outbuilding near it:


The museum houses countless skeletons and remains of dead marine animals that have been carried to the area by the Antarctic current or stranded on nearby beaches because of extreme tide changes. The 4-5 people who work here also live here (there is nothing else around for miles and miles and miles). To be part of this research, you really need to be passionate enough to live completely off-grid at the end of an island with nothing but nature around you, whether it’s alive or dead… Visit the museum and let them show you their treasures… I’ll leave it at that for now 😉
While you’re on that side of the island, stop in the tiny fishing village of Puerto Almanza, and sample some of their fresh crab and seafood stew. The restaurant we went to was called La Sirena y El Capitan. It was one room about 12′ x 12′ with just a few tables and a wood-burning stove and an ollllllllld record player. And somehow, even there in that tiny village on the edge of the Beagle Channel, they still offered some delicious Patagonian craft brews. 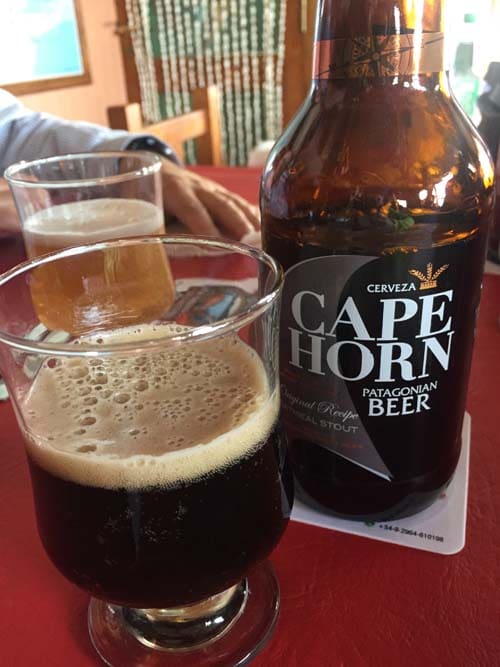 Taste, see, soak it in, there is nowhere in the world quite like Tierra del Fuego.
I invite you all to experience the end of the world and see what is waiting for you there. But go with an open mind, because like a friend said to me, maybe it’s actually the beginning.
I was hosted on this trip by Tierra del Fuego Aventura and Turismo Salta on behalf of The Adventure Travel Trade Association. As always, all opinions are my own.