This is the story of how we got a free dinner at a 5-star restaurant in Baja. If you don’t already know this about me, I LOVE food, so it’s a tribute to a good meal as well. And, if you read to the end, you’ll find out how we actually made money at our free dinner… yep.

Tribute to Learning a Foreign Language

Last week, Nate and I attended a festival in the town of Pescadero, where we are currently living in Mexico. The festival was in celebration of fresas (strawberries) y chiles, and other locally-produced agriculture. It was similar to a farmer’s market, with different foods to try from local restaurants and growers, produce for sale, music, and lots of townspeople. While enjoying a tostada topped with ceviche, I overheard on the PA that there would be a demonstration by the Head Chef of one of the local restaurants. Chef Bueno of Rancho Pescadero, which is by far the nicest restaurant and accommodations in town, was about to start his demonstration of how to make Chimichurri.

We were standing at the back of the crowd, straining to hear the chef over the music, and we were definitely the only white people around. The entire demonstration was given in Spanish, naturally, and at the end when he started giving away aprons by asking trivia questions about what he had just done, I decided to chime in. I actually won an apron for answering a question right (woohoo!). What I didn’t expect was what happened next.

At the very end, he asked those who had won aprons to come forward, so I did, along with two other people. This was for the grand prize, which I thought was a jar of the Chimichurri. If we could name every ingredient that went into the Chimichurri, we would win the prize. Oh great, I could barely hear the demonstration as it was, and I only caught the second half of the ingredients, I missed nearly all the herbs he put into the recipe. However, I was the last one, and he started with the first woman, who went right down the list and named every single ingredient except one. She couldn’t come up with it, so he moved on to the man next to me, who was completely clueless as to what ingredient she had left out, and so, he moved on to me, and guess what. I knew exactly what the missing ingredient was: mustard! I know, random, but hey, I was right! He concluded the demonstration and then gave me a business card that said “Good for dinner for two in the garden restaurant.” WHAT? I had just won dinner for two at the nicest restaurant around, all because I speak Spanish, paid attention to a food demonstration, and wasn’t afraid to speak up when I had the chance. It seemed that I was meant to be the one who won the dinner. SCORE. 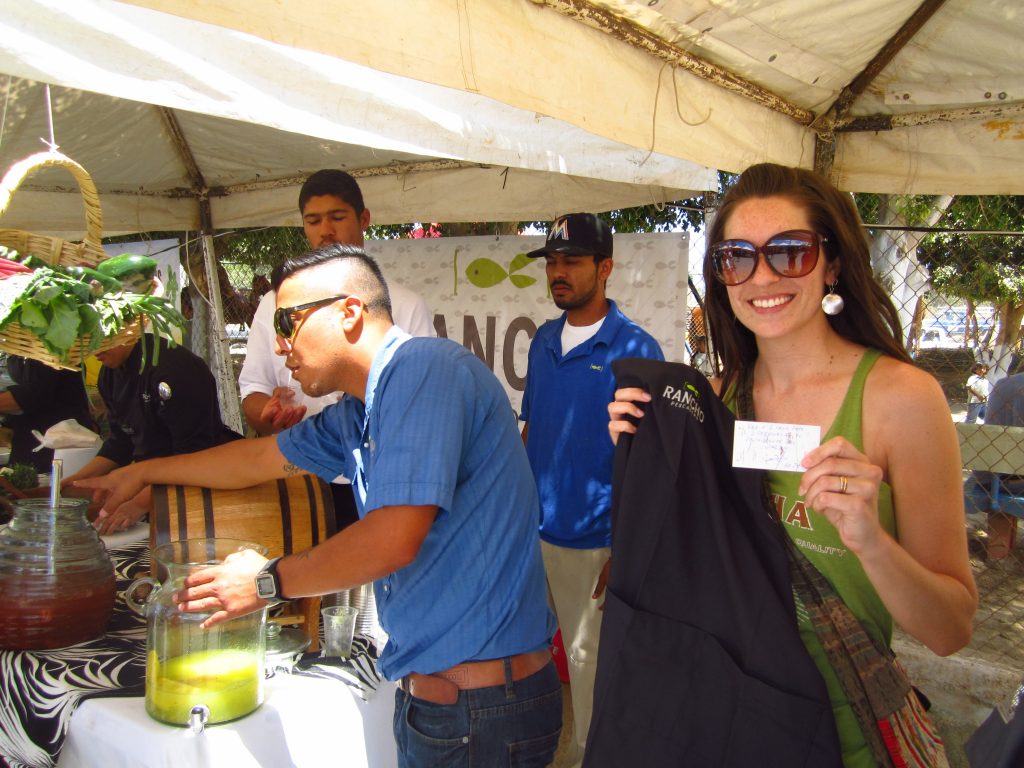 Who Needs a Menu When You’re Ballin’?

On the evening of Good Friday, we walked into the beautiful garden restaurant of Rancho Pescadero where we were nearly the first ones there and had our choice of seats. Chef Bueno recognized us from the festival and invited us to sit at the special bar around his cooking area, where we would get “special treatment” and the option of a Chef’s choice meal. DONE. Our prize was to include dinner and wine, but we had no idea that would mean 5 courses and free refills; the only thing we paid for was the tip. We also weren’t prepared for Chef’s choice. When have we ever been able to tell the chef to make whatever he wants and surprise us? Never. Until now. Any allergies? Nope. Go for it.

This was the type of dinner where different silverware and dishes were set up for each course by our super professional server, and this is what the Chef chose: 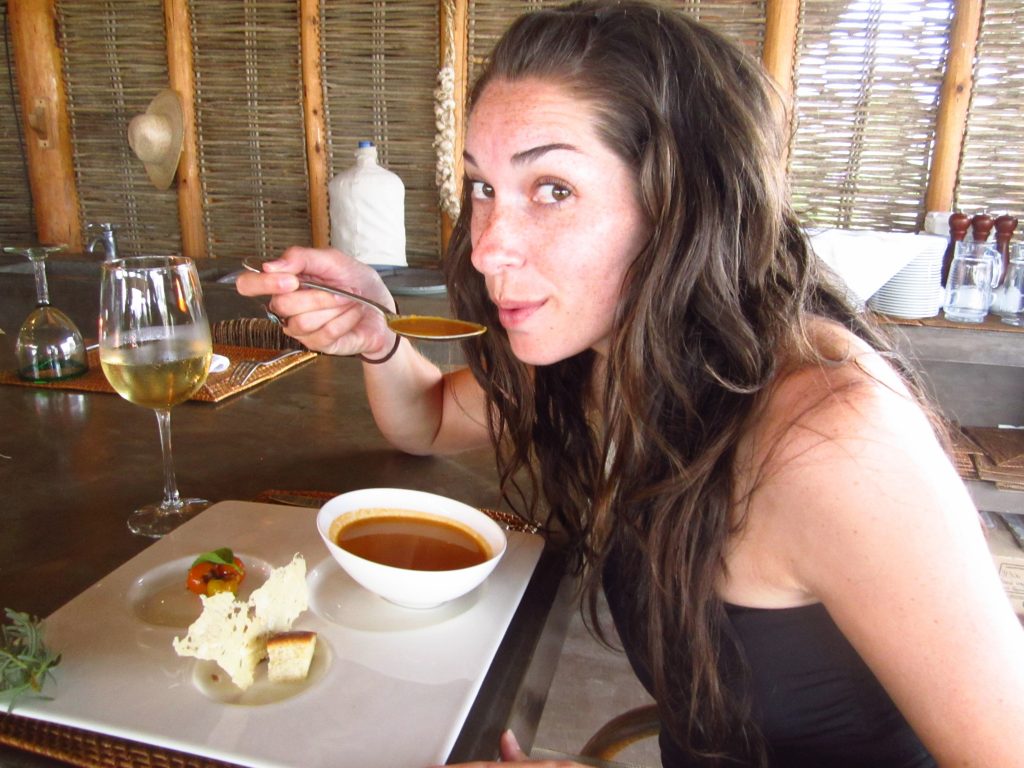 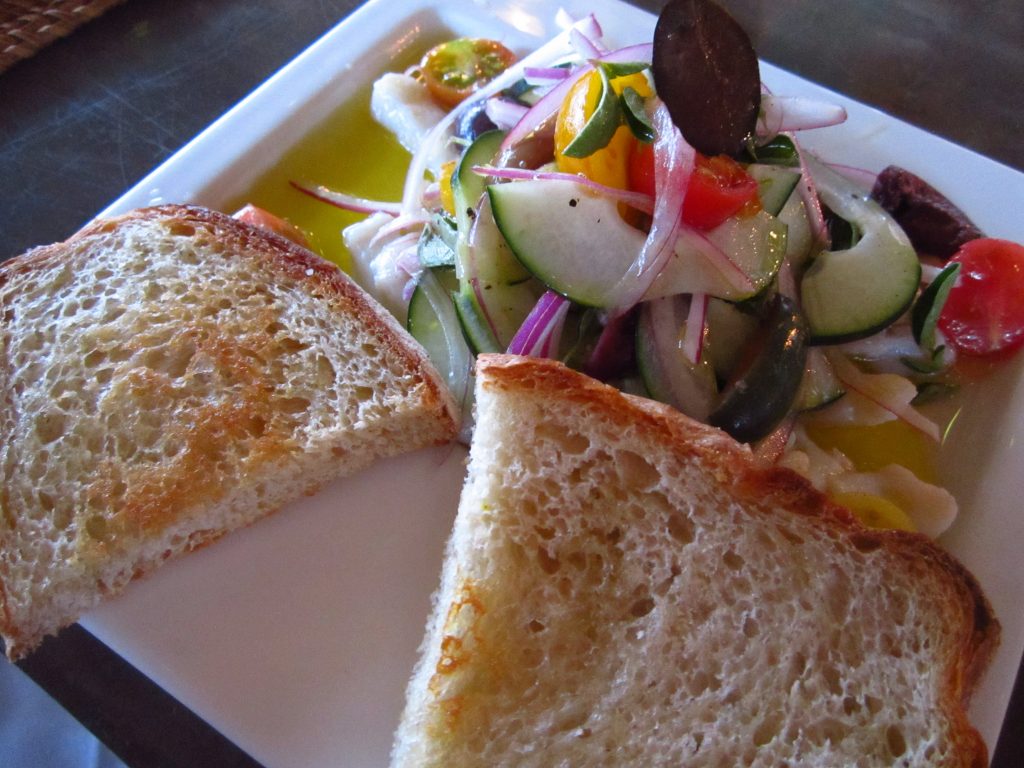 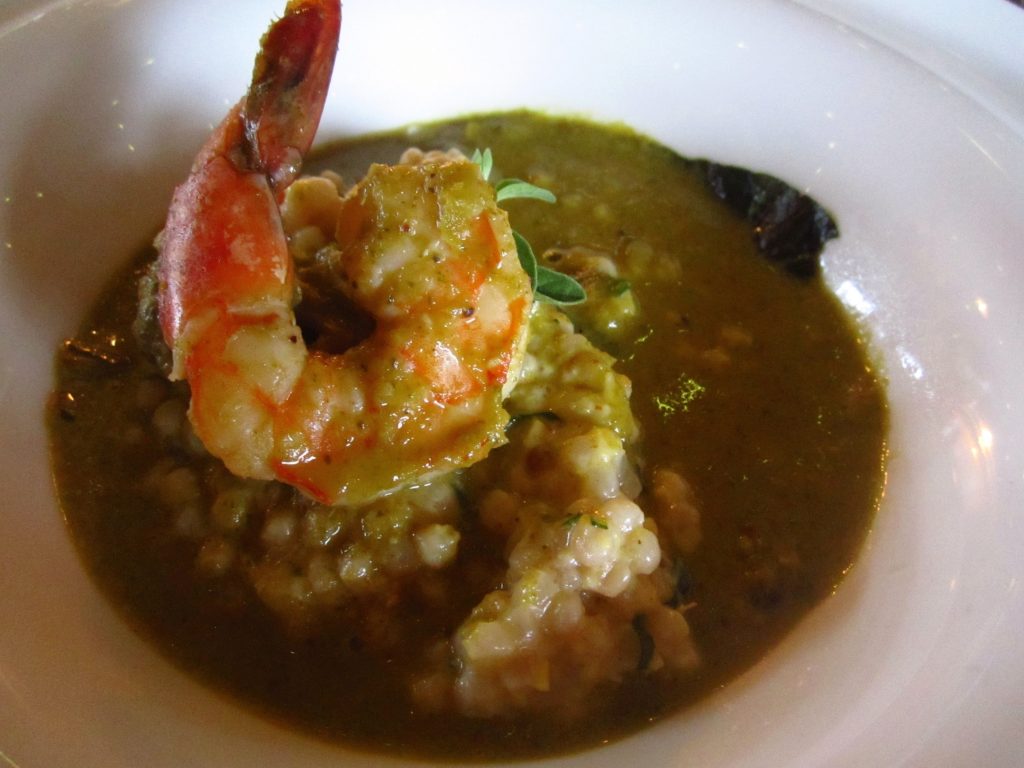 Course 4: Ribeye, grilled to perfection, served with potatoes and roasted vegetables, and topped with none other than the chef’s famous Chimichurri 😉 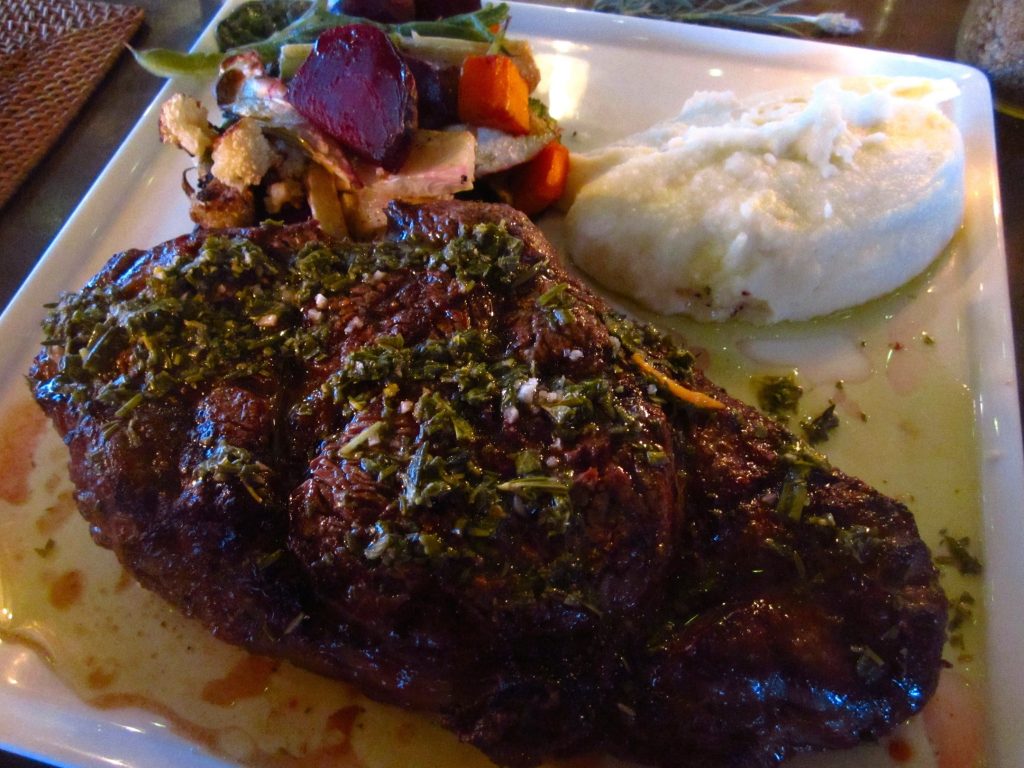 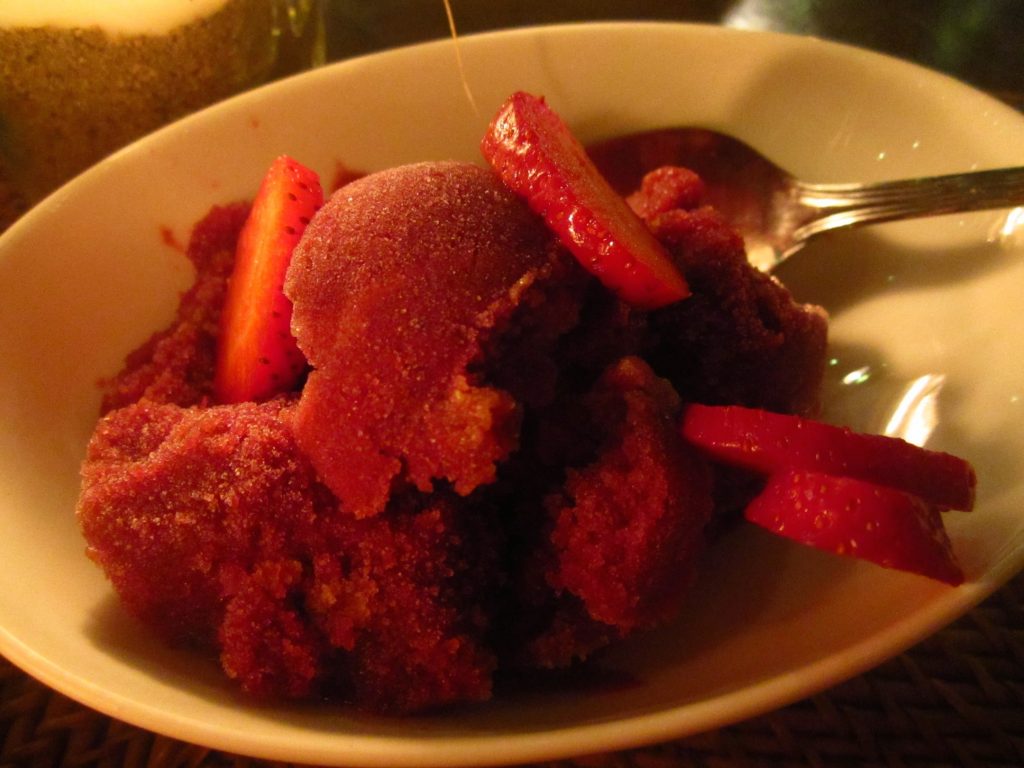 Were we impressed and did we like it? Oh yes. We liked everything about it: the staff who seemed to truly enjoy their jobs, the professionalism of the chef, the flavors of every course, the ambiance of the outdoor garden restaurant covered in white lights and surrounded by a beautiful organic vegetable garden, the sounds coming from the solo musician just steps away, even the conversation with the new friends we met who sat at the bar with us. 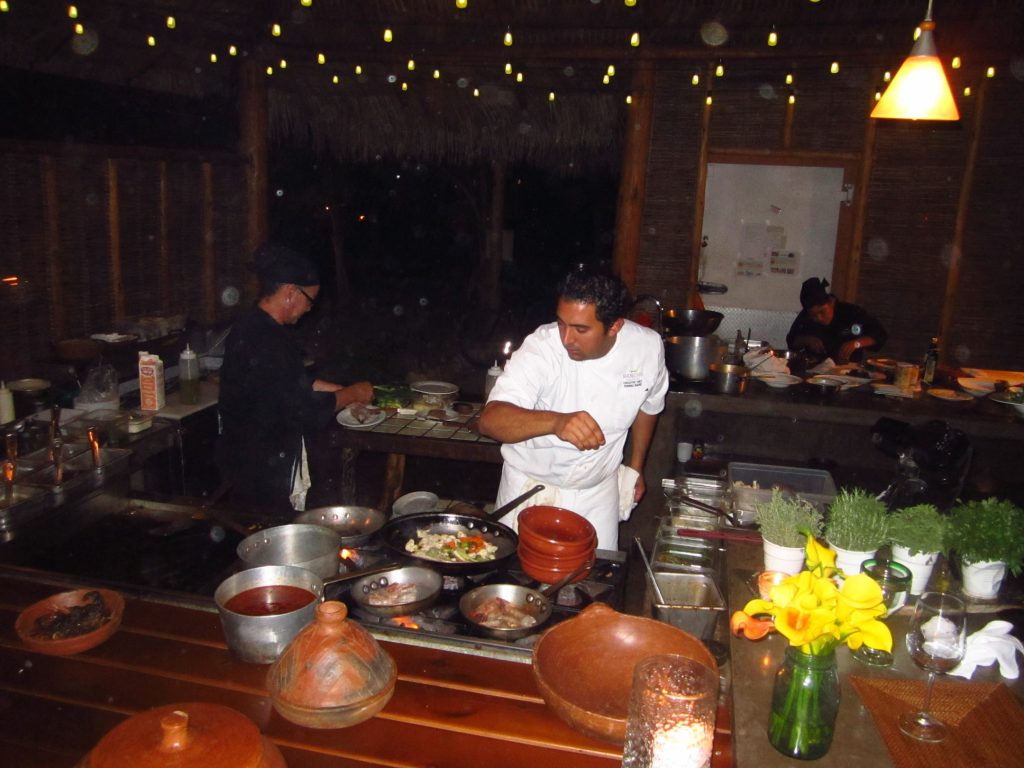 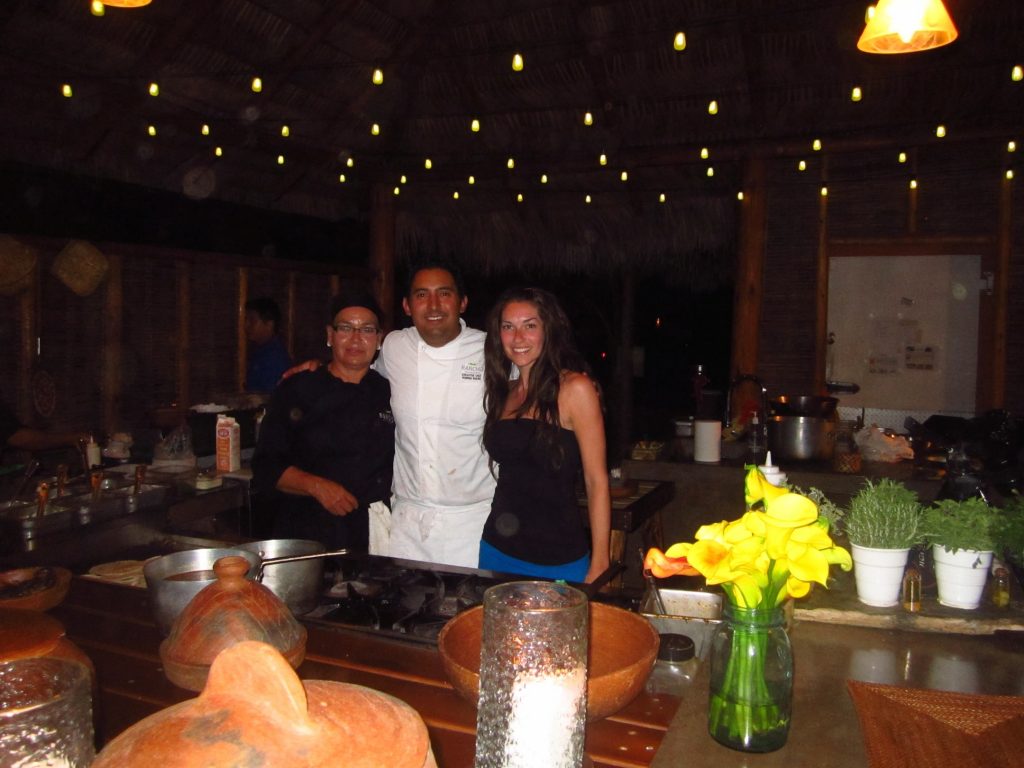 A Fun Twist to End the Night

You never know who you’re going to meet when you’re open to conversations with total strangers. We happened to hit it off really well with the couple who sat next to us at dinner, and we literally chatted for hours as we ate and even joined them at the bonfire afterwards. We took an interest in each other’s stories, and they asked me a thousand questions about how we travel on such a budget. They were blown away that we had won this amazing dinner, and they ended up purchasing two of my books from me right then and there, even though I couldn’t deliver them until the next day. And that is how we actually made money at our free dinner. What a night.

I wanted to give a special thanks and shout out to Chef Bueno and the rest of the staff at Rancho Pescadero, you are all so professional and provide such a great experience for your guests, we enjoyed every minute that we spent with you!

Lastly, if and when you find yourself in southern Baja, be sure to make your way to Rancho Pescadero, sit at the bar and ask for Chef Bueno’s choice, you won’t be disappointed.