I had no idea what I was getting myself into by climbing onto that bus, a little hungover and a lot unprepared for what was ahead of me on Busabout’s Ottoman Trek. It was early on a hot Saturday morning in Split, Croatia, and I had stayed up late with my boat mates the night before, celebrating the last night of our Croatia Sailing trip. 8am came fast, and we left right on time.

My new Busabout trip mates were friendly, and, aside from the hangover epidemic (Split has that affect on travelers), were mostly eager to meet everyone. I had been the lone American on the sailboat, but this time around, there were two of us. There were a few other randoms as well, but once again, Aussies ruled. I didn’t mind, by that point I had all but picked up the accent, hey.

As our bus headed towards the Bosnian border, our Croatian guide Ivan engaged us all in “games” that we would “play” throughout the week. Sharing 5 songs from the playlists of our lives, telling two truths and a lie, when you have a lot of time on a bus, you play a lot of games (when you’re not sleeping).

Over a span of eight days, our trek would take us from Croatia into Bosnia Herzogovina, Serbia, Bulgaria, and eventually Turkey, finishing up in Istanbul. We would spend no more than two nights in any one place; as Ivan would say, “Another day, another country, that’s how we roll.” It was a quick trip, but even quicker were the bonds and memories made between 30 people who started as strangers and ended as family.

Our first lunch stop was in Mostar, whose old town of cobblestone streets and colorful, wooden market stalls are straight out of a fairy tale. Not to mention the famous bridge in the center, where if you hang around long enough (and give them enough money), some crazy local guys will jump off the highest point into the river far below. THAT. Made my stomach turn. The beautiful mosques dotting the river were the first reminder that we had left western Europe behind. The pace here was slow and relaxed, perfectly matching the lazy summer weather. 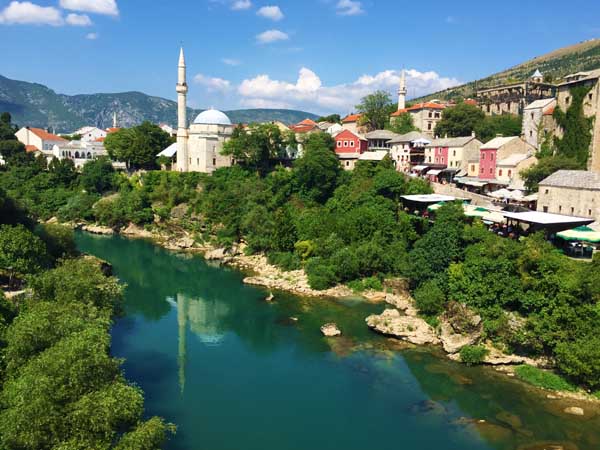 Most of us couldn’t stay awake after our lunch break in Mostar, which was unfortunate, because we passed through the most beautiful landscape of the week on that drive to my favorite stop: Sarajevo. My dinner of dolma on the bank of the river across from the impressive National Library, set to the local tunes of a table-side serenade, was a beautifully relaxing end to the first day of our trip. One day in Sarajevo was simultaneously like a slow slap in the face and a warm hug. I was not mentally ready for what Sarajevo showed me, but I embraced it in its rawness, and it left a deep impression on me. We witnessed first-hand the results of its tragic, recent history (the tunnel of life, scars from the siege, the memorial to the Srebrenica genocide), and experienced its captivating and charming integration of East and West, from the architecture, to the culture, to the people. Two nights was not enough, but Serbia was calling. 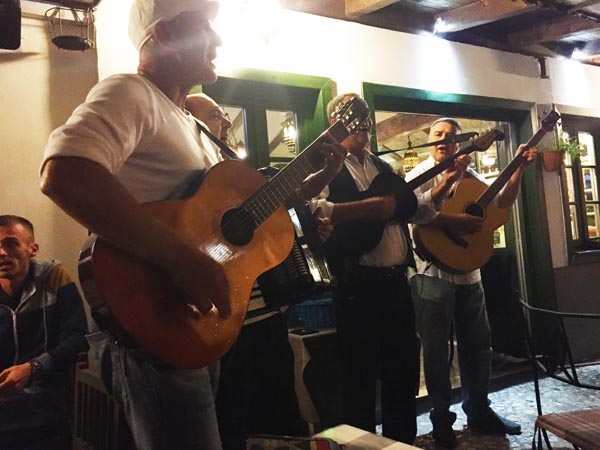 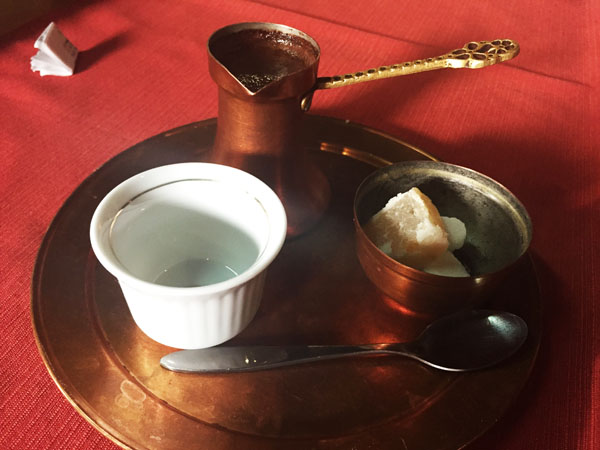 This was another two-night stop, and we also got to have an entire day free in Belgrade. After a walking tour and a round of rakia, we hit the Bohemian quarter for dinner, followed by a night out on the famous barge clubs. I ended up spending my entire free day by myself, after a two-hour delicious breakfast with my roommate, wandering the streets (and the racks at H&M), and finally settling into a local brew pub for some craft beers, all afternoon (don’t judge). By the time the group got back together to head out in the morning, I think we were all feeling a bit refreshed and ready to hit the road. 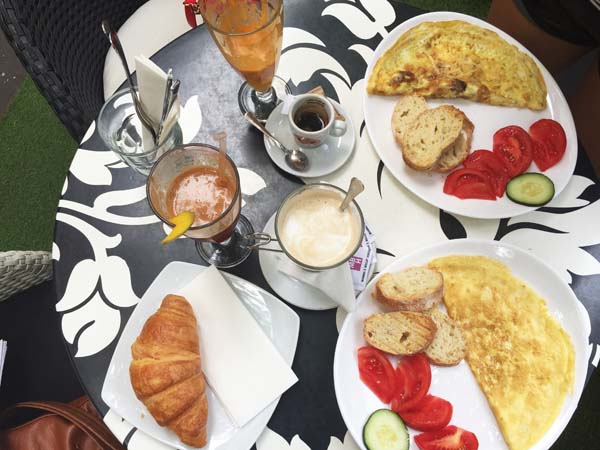 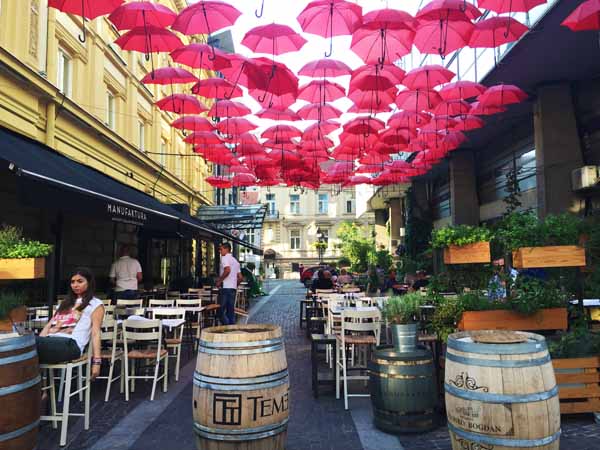 This was just a lunch stop, but I loved it because I had a run in with some locals. After a walk through the old fortress, we hit the local market where I was drawn to a table of figs. I wanted just a handful, just enough for a snack for myself, but the vendors didn’t seem to understand me. They spoke ZERO English, not a word. They kept speaking Serbian to me as if the more they repeated, the more I would understand (how I want to understand!).

After about two minutes of back and forth, and almost giving up because I thought they were saying I had to buy a kilo (that’s way too much), they handed me a plastic bag to choose my figs. So I did. What happened next made my day.

They refused my money for such a small bag of figs, and, with huge smiles and a lot of commotion that I didn’t understand completely, insisted I take a couple pears as well. I immediately asked for a photo, and they were so excited about it that after I took this selfie, they invited me around the table for another photo and hugs and kisses before sending me on my way. No kidding. That moment with them meant more to me than the hour we had spent aimlessly wandering the fortress. These are the very moments that I travel for. 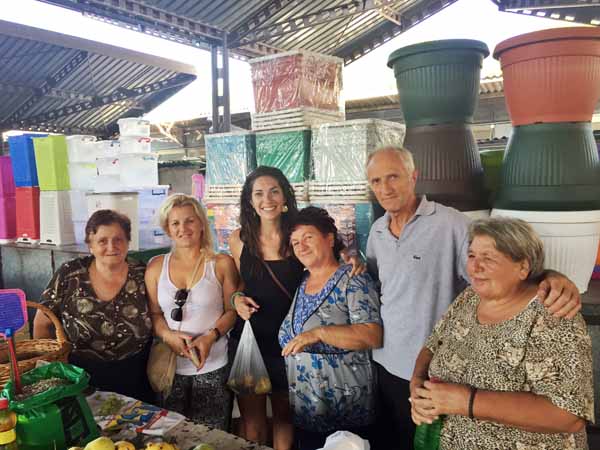 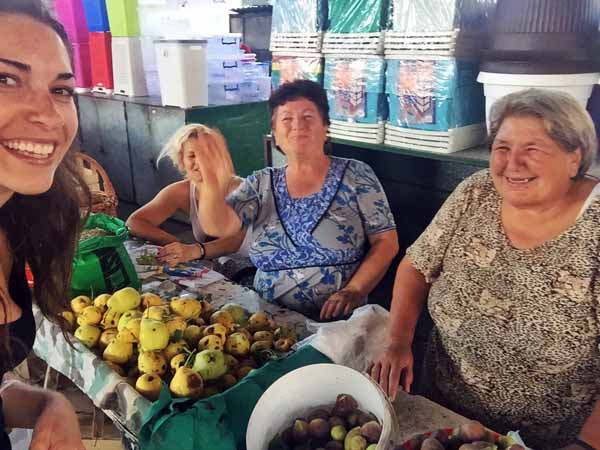 Our stop in Sofia was really short, which made me glad that I had visited the city before to really get a sense of it. The biggest surprise here was our hotel room. I understand that different Busabout tours use different hotel rooms for different weeks depending on availability, etc, but I can bet that almost everyone in our group wanted to stay another night in Sofia because of this hotel. Here we are, backpackers trekking across the Balkans, and Sofia greets us like this:

We did a brief walking tour before heading out to our gypsy dinner, which was optional at an additional price, but everyone signed up for it (because why not). We ate family-style off of platters overflowing with local foods, enjoyed some rakia (the homemade liquor of the Balkans) and then joined the musicians for some traditional dancing (followed by some not-so-traditional dancing).

Throughout the week, we couldn’t figure out why Ivan would laugh and shake his head every time he mentioned Sunny Beach, but it all became clear once we got to spend a night there. This may seem an arbitrary addition to a tour through the Balkans, as Sunny Beach is like the Cancun of the Black Sea, but honestly, it was probably the funnest night of the trip. And now we all understand the laughing, the shaking of the head, and the popular demand for Sunny Beach to be included in the Busabout itinerary. What happens in Sunny Beach, stays in Sunny Beach. And that’s all I need to say about that.

What a crazy thing that we had driven all the way from Croatia to Istanbul and seen so much in between. Road trips are amazing for that. This was my second time in Istanbul this summer, my third time there overall, and this presented an interesting observation for me. I remember when I first visited the city for 10 days in 2009, I felt so far from home in such a foreign culture, surrounded by all the anxiety and fascination that comes with that. When I returned to explore it further in May of this year, I was impressed that there were still so many new things for me to see and do and experience with different people. This time, with only one night to spend, I completely relaxed, and I remember feeling that it felt like home. Bingo. This is a city I’ve come to know and love, and most importantly, feel really comfortable in. I was able to appreciate the markets and mosques from the outside, without feeling I had to go in and be a tourist. Instead of visiting any sites during our free time, I enjoyed a coffee and some time to relax and reflect.

The most surprising thing about Istanbul this time was the hostel where we stayed. I was blown away, seriously. It was called the Sultan Hostel, and we ate dinner at its restaurant downstairs, the Sultan Pub. Here is one thing you have to try in Istanbul, and I can’t believe I hadn’t seen it in my visits before, especially with its name: Testy Kebab. No kidding. Watch the video to see the clay pot being tapped, opened, and poured onto a plate. It’s a heavenly mix of meat, veggies, and spices, one of the tastiest meals I’ve had in Turkey. 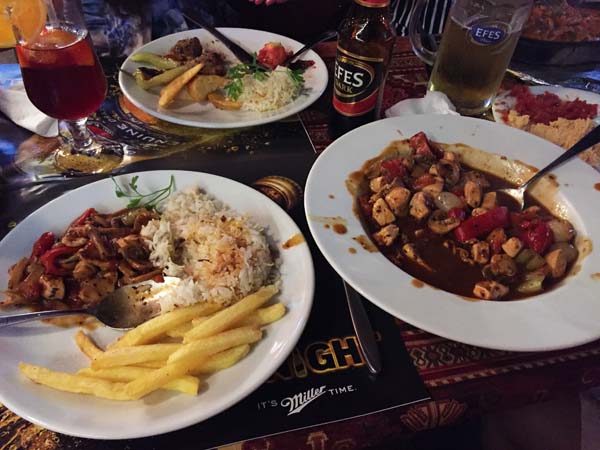 Following our meals, the staff brought out shisha for each table and taught us how to blow smoke bubbles using recycled plastic bottles, watch my Snapchat story below from this day to see this in action! And follow me @travelingjackie for more snaps from my travels.

To finish out this recap of this incredible trip, I’m going to quote our guide Ivan one more time, on a subject that is so very real. We have just traveled through an area that has not seen peace for more than 50 years at a time, where things can change quickly, and they will. And as Ivan says, “If you have the opportunity to travel somewhere, do it. Because you never know, things change so rapidly.” Get to the Balkans before the peace is disrupted again, and if you want a fun way to do it, go with Busabout!

*This post is part of a collaboration, but as always, all opinions are my own.